The Pied Pipers of the Lower East Side at PS122 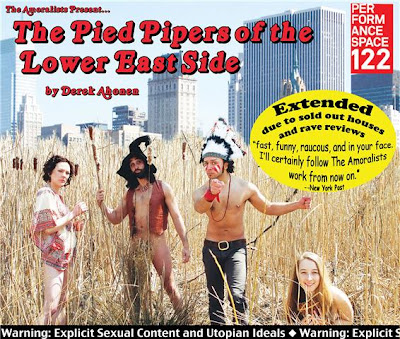 I adventured down to Performance Space 122 (PS122) on the Lower East Side with my friend Byrne of stagebuzz.com last night. Going to the Lower East Side is always like crossing into a foreign land and I feel like an old square visiting my college hipster kids.

It was my first time at PS122 and even though I'm still new to this off-off Broadway environment, I immediately felt at home in the downstairs, intimate blackbox theatre. We were there for The Pied Pipers of the Lower East Side, presented by The Amoralists, and starring Matthew Pilieci as Wyatt, James Kautz as Billy, Mandy Nicole Moore as Dawn, Sarah Lemp as Dear, Nick Lawson as Evan and Charles Meola as Donovan. Derek Ahonen is the playwright and the director.

The set looks like a tiny, dilapidated New York apartment - telling posters and graffiti on the wall, empty beer and liquor bottles everywhere and a chockablock of unusual instruments giving us a clue of it's inhabitants. Great jiving music was playing over the excellent sound system.

As the lights go up, there is immediately a very physical fight between the two male characters, one only in dirty pair of underwear, one looking like he stepped out of the cast of Hair. I was immediately on edge as I thought, "Oh great, hippies."

But these are not the hippies of Hair. These are the vegans and hipster anarchists of current day New York's Lower East Side. As the story unfolds, it's revealed that the two women, Dawn, still a teenager and street singer and Dear, a thirty-something former lawyer now a manager of a vegan restaurant, are more than just living with the two men, Wyatt, a former prostitute/squatter/day laborer and Billy, a junkie/alcoholic/anarchist/journalist. The four of them have conceived an extended sexual family, living off the land and only in the now. Each loves each other and each sleeps with each other, without jealousy and without discrimination toward sexual preference.

Dear is the only one who seems to have no real hang ups. She's practically the leader, certainly the mother-figure, of this chaotic group of misfits. Dawn is running from a physically and sexually abusive family. Billy is afraid to join the anarchist as he turns to drugs and alcohol. Wyatt is afraid of what happens after death and goes into panic attacks at the thought of the unknown.

The story heats up when Billy's 20 year old brother Evan, also a journalism major, comes for a visit from Iowa. It seems as though he might have been sent by their parents, but his motive is to party and get laid. He's a vulgar, closed-minded frat boy. He was so vile, I found myself siding with the hippies!

If you plan on seeing this play, this is where you should stop reading, as this is when the fun sets in.

While Evan is mouthing off to his brother Billy, the other three members of the family are trysting in the bathroom shower and overhear him. Here comes the most audacious entrance I've ever seen on a stage. I've seen nudity on a stage, but this has nothing on that.

All three, still wet from their shower, run in gleefully to Evan's shock. What really mortifies Evan is that Wyatt, played by the physically well built Matthew, is fully erect. It is the most unabashed, fearless display I've ever seen. The audience was dying with laughter at his antics and poor Evan's horror. What was really great about the scene was Nick Lawson performance as Evan. He perfectly displayed the horror and embarrassment of a big talking young buck. Evan manages to overcome his embarrassment as he is unable to resist the taunting seduction by Dawn, who is barely younger than he.

Things settle in. The family lives as usual, and makes an attempt to educate and open Evan's mind. They offer him the opportunity to "interview" them. This gives them the opportunity to sell their belief system. While they talked a good talk, none of them are that convincing. What was hard for me to buy in to was the irrationality of these ideas of free love, living off nothing with no goals, especially when the preaching was coming from such anti-conformists as a former prostitute and a drug addict.

The only one of the family members who is semi-believable is the calm and logical Dear. She delivered an unforgettable idea, "The opposite of love is indifference." She claims that she wouldn't begrudge one of them leaving the family if they found another love. She had almost an unreal patience when all around her seemed like chaos and insanity at times.

I also wondered what it was that drove Dear away from her law practice. From the little we heard of it, it wasn't exactly the typical corporate law firm so I'm not sure why she left it to live as the manager of a vegan restaurant so she could shack up with the family.

Everything falls apart with the family unit when their benefactor Donovan arrives. He is the owner of the building where they live and work in their vegan restaurant. He holds the purse strings, although he doesn't necessarily give them money other than funding for their effort. He's a crass kidder and guilt ridden trust fund rich. Irritating from the first moment of his entrance, he only has bad news for them when he finally has to tell them that he has sold the building and they have only three days to get out.

Now comes the third and only weak act of the three. Always seeming half witted and carefree until now, the aloof Dawn's fragility comes to the forefront and runs away. The young brother Evan follows her. Things really go awry when Donovan comes back. He professes his love for Dear and attempts to persuade her to run away with him, by tempting with her enough money to do any of the good acts she wishes to do. What's unbelievable here is that she actually seems to consider it.

They are interrupted by another chaotic entrance by Wyatt. This time he's carrying a mute, paralyzed Billy. Billy appears to be tripping. When he finally comes to, he tell them that he has seen the light, literally. He is suddenly not afraid to return to the anarchist. This throws Wyatt into another panic attack. Evan and Dawn return and reveal that they not only are they in love, but will not remain with the family and are returning to Iowa. Once again, Nick Lawson shows how he delivers the acting. Evan's final moments with his brother is absolutely tender and heartbreaking.

And finally, Dear has a breakdown and is furious at Dawn's abandonment. Not only are they losing Dawn, but Billy will not be with them. Their family unit is over, as is the experiment of the extended sexual family. The flaw in Billy's plan is that he is now paralyzed although it's not clear if it's only an hysterical paralysis or what. All the while this happening, they are moving out of the apartment. It's a little confusing in all of the chaos.

This act was just as chaotic as the others, but not in an entertaining, funny or even thought-provoking way. To me, it was almost a punishment for their attempt to forgo the conventional. However, the first two acts are so incredibly entertaining and interesting that I found myself agreeing with their ideas of living for a better Earth, of not leaving a carbon footprint, of not judging. I even forgot that I was a square upper west sider for those two hours.

This play is an incredible, physically fast moving presentation. It's almost like you're not watching a play - this is only partly because of this very memorable play. The actors are fantastic - seamless, real, fearless, audacious, unabashed and tender when they need be. I don't know how they do this 5 or 6 times a week.

It's no wonder that this show has extended from its original end date in June. It's now running until August 23rd.
at 6:28 PM