Q&A with Kristy Cates - Star of For the Love of Christ at Fringe! 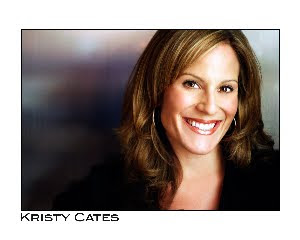 One of the FringeNYC shows opening tomorrow is For the Love of Christ! It's a new musical by Ben Knox (and starring Ben) in which Kristy Cates plays Angela, a religious zealot who finds love in an unexpected way.

Kristy was in the Original Broadway Cast of Wicked and understudy to the lead role of Elphaba. She starred as Elphaba in the Chicago and first National Tour productions of Wicked. Most recently Kristy played Madison in Click, Clack, Moo at the Lucille Lortel Theatre. Other credits are Ruth Wallis in Boobs! The Musical, Snapshots (by Stephen Schwartz), the New York Gilbert and Sullivan Players’ Princess Ida and the world premiere of the new musical Unbeatable (original cast album available at www.unbeatablemusical.com). She’s worked in other regional theatre as well as on the concert stage at New York’s Joe’s Pub, The Duplex, Chicago’s Metropolis - even Palace of Versailles in Paris!

Kristy recently added the role of vocal/audition coach and voice teacher to her repertoire. She is offering private lessons and is thrilled to be a new member of the MAXTHEATRIX team.

Is this your first fringe show?
Nope! Two years ago I did a play in the Fringe called "The Other Side of Darkness." It was written by my dear friend, Phil Geoffrey Bond and starred myself, the sexy David Rudd, and the amazing Rob Maitner. It was one of the only straight plays I've ever done - and I loved it.

The press release for FLOC says there are "maniacal monkeys". Anything like the flying monkeys in Wicked?
Hmmm...well, I haven't seen their costumes yet, but I CAN tell you that the wonderful young men playing monkeys in FLOC could easily play monkeys in Wicked. The monkey's in Wicked are never really used for evil - but they sure are in FLOC! And they fall from the sky....tied together....in pastel colors. So, no...not really!

You played "Ruth Wallis" - did you get a chance to meet her before she passed away?
I did! And what a saucy woman she was! And tiny! She loved our production, which was really heartwarming and gratifying. She was one of those straight shooters, you know? Very sassy and very quick. I do remember her telling me I had a better "rack" than she could ever dream of - and it made me crack up. Have you ever had a 75 year old woman tell you that? It was too much. Ruth was very supportive and an absolute doll. It was an honor to portray her on stage AND be able to spend some time with her in a social setting. I will never forget her smile.

You performed at Palace of Versailles in Paris? The actual Versailles - as in King Louis the 14th? What did you wear?
Yes, the actual Versailles. AMAZING. We performed in the part of the palace used primarily by Marie Antoinette (I know, whhhuuuuuttttt?!!?). I remember the woman who was running the joint was freaking out during our sound check. I guess they had never allowed anything but classical music in the palace before....and here I am, belting out Defying Gravity. It was priceless. Before we performed, they fed us in one of the rooms in the basement that was used for prisoners - we actors get no respect. No, seriously, it was incredible...eating in the basement of Versailles, singing in the ballroom where Marie Antoinette used to dance with King Louis, all those cute French waiters. WOW. I wore a long black gown by Laundry. I starved myself to fit into it - and it showed enough cleavage to make Marie proud!

Any dream roles you'd like to take on?
Ooh. Sure. Lots. I was cast as Eva Peron last summer - but opted to do a new show (Unbeatable) instead. It turned out to be a great choice because playing a woman with breast cancer was a life changing experience, but I'd still love to play Eva someday. I'd also love to play Mama Rose in 15-20 years, Donna in Mamma Mia, Fantine, The Baker's Wife, Chris in Miss Saigon. Yes, I DO mean Chris. I could sing the hell out of "Why God, Why?" And pretty much any role Carolee Carmello (my idol) has ever played.

How's the teaching going?
Thanks for asking! It's going well. Slow, but well. I've been so busy (yay for working!) that I haven't had much time to build up my client list, but the students I do have are amazing. I think what makes me unique as a teacher is that I have a lot of different "specialties" to bring to the table. I've been in NYC for 10 years - and I've probably been on over 1000 auditions. I know how to market, to network, to prepare for an audition. I also have a good eye for what translates in the room and what doesn't (much better for others than myself, unfortunately) and a great ear. I feel like I can offer people a very well rounded lesson/coaching. I kind of had to learn how to "mix" half way through my run as Elphaba. I thought it was ok to fully belt out those notes night after night....and I WAS fine until I got strep throat and sang through it for a week. After that, I had to develop a strong and reliable mix...much safer and EASIER than belting 8 times a week. It's taken me a while, but my voice teacher, Matt Farnsworth (and Liz Caplan before him), taught me SO much about placement and safe singing. I would like to help others achieve that safe, strong, amazing place - so that they don't have to go through what I did and they can feel confident every time they open their mouth to belt it out!

Any plans to record an album? If so, any specific tunes or composers would like to record?
People ask me this all the time...but would anyone really buy it? Besides my family members? I don't know....I adore Jason Robert Brown, Lippa, Schwartz, Billy Joel...and Jazz standards. Maybe someday.

What's your next project?
Well, after doing a "G" rated show every morning - "Click, Clack, Moo" at the Lucille Lortel Theatre -and a PG -17 show at night - "FLOC" - where I basically sexually devour a preacher (my sweet friend, Marty Thomas) on stage, I am headed to St. Louis next month for another run of Unbeatable (http://www.unbeatablemusical.com/). The show was scheduled to be playing at New World Stages right now, but due to monetary woes, we never made it into the city. It's a fantastic show about a woman living with (not dying from) breast cancer. It's a challenging and rewarding role and I'm looking forward to revisiting it soon. Other than that, who knows. Anyone wanna hire me? :)

Email ThisBlogThis!Share to TwitterShare to FacebookShare to Pinterest
Labels: For the Love of Christ, Kristy Cates