Q&A with Owen Dara of White Horses: An Irish Childhood 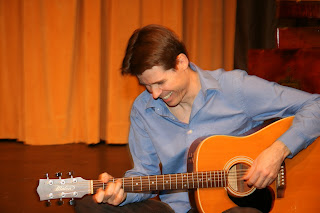 One FringeNYC custom is for members of shows to paper the line of people waiting on line for other shows. On Sunday, I was waiting on line, and had the opportunity to meet Owen Dara as he was handing out postcards for his show, White Horses: An Irish Childhood. I had the chance to visit with him about White Horses:

What is your show about?
White Horses is about the struggle of growing up with parents who have conflicting views of how their children should be raised. Ma was a dedicated Catholic, Da never went to Mass. Her family was educated, his was working class. He loved to watch tv, she was convinced it was the primary tool of the devil. It's about a boy struggling to understand where he fits in, and how he is going to find his place in the world--a journey of constant searching and ultimate realization. It is also a comedic look at Irish society during an era when the Catholic church was unquestionably divine, and family problems were never acknowledged or talked about outside the home. It is about universal familial relationships.

This was originally your memoir? Is it published?
The memoir was published in 2007 by Breaking Tide, a company started by myself and Jessica Lancaster, which also produced "Transmission" my recently shot feature film.

What inspired you to write it?
I was taking a writing class and was given an assignment by my teacher, Jim Krusoe. The assignment entailed creating a story using 5 particular nouns, which he wrote on the blackboard. I was feeling uninspired, so I just wrote something about my childhood in order to quickly fullfull the assignment before class. He handed it back to me the following week with the most positive feedback I had ever gotten from him up to that point. I was pleasantly surprised, and became inspired to write about other events of my childhood. Before long I had the first draft of my book.

Who are your collaborators and how long have you been working with them?
My main collabarators are Dan Toscano and Elizabeth Duck. They have been on board as directors since I finished the very first draft of my show. They are both wonderful people and extremely talented. Elizabeth helped me mostly with the character work. I remember during our first rehearsal, she got down on the floor and pretended to be a 4-year-old child playing in a sand pit. "Come on Owen, help me build a sand castle" she said with child-like enthusiasm. I joined her and we were both 4-year olds, who played in the sand for the rest of the afternoon. She also found appropriate activities for most of the other characters that I play in the show. Her commitment to character was enormously helpful to my process. Dan helped me mostly with structuring the script. He is an extremely funny person, who has a wonderful sense of what scenes should be cut and of which characters need more time on stage than others. Since my father was a potter, Dan also suggested that we build a pottery wheel (which he finished and decorated beautifully) for use on stage during some scenes where I play my father. Now I can't imagine the show without a pottery wheel. Each of my directors probably had an equal share in blocking the piece.

Any plans for another run somewhere?
I have no plans to run the show elsewhere for now. After FringeNYC, I will return to LA to continue post production on my feature film. As soon as that's done, I will definitely be open to doing a run of the show again.

Do you have duel citizenship with Ireland?
I am a citizen of Ireland (born and raised), Australia (spent most of my 20's there), and USA (been here for 10 years).

Guinness or Harps?
Actually I prefer Murphys, the local brew of my native Cork.

White Horses, an Irish Childhood runs at Venue #7, Manhattan Theatre Source and can be seen tonight, Thursday the 27th @ 7:15pm and on Sunday, the 30th @ 12 Noon. Tickets are available via FringeNYC.org.

Quick kind of off topic question: did you ever see Young Frankenstein on bway? The newer one, I mean?