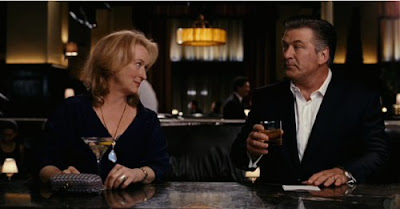 I caught a pre-release screening of It's Complicated last night. It's slated for release on December 25th. Unfortunately, it's no Christmas present. The best thing I can say is that it was free.

The film itself, written and directed by Nancy Myers, is a combination of Nancy's other films, especially Something's Gotta Give and Father of the Bride. Some scenes are almost exactly the same - just change the face of the actors. Of course, true to Nancy's style, the house and shots are pretty.

It's a waste of a dream cast - Meryl Streep, Alec Baldwin, Steve Martin and John Krasinski. Even Mary Kay Place is in it. Poor Mary Kay Place is relegated to barely a cameo. Alexandra Wentworth and the useless Rita Wilson have each more lines. What a waste. Steve Martin was nicely understated and sort of dreamy. He's no wild and crazy guy in this film - he actually plays a real grown up. Unfortunately, there's not an ounce of chemistry between Meryl and Alec - they just look so uncomfortable with each other.

Meryl plays a neurotic divorcee who has come in to her own with everything except love. Alec is her ex-husband, remarried to a young, sexy wife and with a young son. Meryl and Alec have three grown children. At least I think they are grown - they are angelic looking blondes with giant blue eyes - the most unrealistic casting ever. John Krasinski plays the fiance of the oldest daughter and is obviously there for comic relief. It's no relief.

I usually don't like supporting cast members, but these are worse than usual. The divorce supposedly happened 10 years ago, but there's a strange timing issue with facts - the son is graduating from Columbia (ugh, they all travel to New York for the graduation and Alex's new wife can't go, bingo, so easy). So you would think the son is probably 22 or 23 but he later says he was only 8 when his parents divorced. Huh? Anyway, I'm picky.

Is it a romantic comedy? A girl-friend comedy? A family comedy? Who knows. Oh, one more thing - Meryl has a French pastry shop and yes, she cooks a lot in the film. Really, two cooking movies in a row for Meryl? Wait for this one to come to DVD or better, cable tv - you'll be grateful for the commercials.
at 10:25 PM

Probably one of the funniest film reviews I've read in a while. Brava, SarahB!

Like...ALL supporting cast members in any film/tv show/play/musical? Why is that?

Too bad. Waste of a lot of talent.

Haha RivB, yes almost always supporting cast members - they are just irritating. I'm more interested int he dialogue between main characters than I am about the extras who are only used to push a movie along or add time. Here's a shocker, I don't even like them in Gypsy. Gasp! Well, except the strippers - they are impossible not to like.

Oh dear; this is exactly what I feared. Thank you for saving me $14.00 and a world of irritation.

(SOB: It's Nancy Meyers, the writer/director.)

That's interesting, Sarah, I usually like supporting characters better than the main characters. They are often more interesting I find.

It's funny to see people are saying "thank you for saving me from seeing this movie" WTF!!!

karigee said...
This comment has been removed by the author.
4:18 PM

Sorry; I won't pick a fight here, but you know I trust your opinion, SarahB.

Top Ten List Of Supporting Characters Who Are More Entertaining Than The Leads: