Tonight: Hamlet at the Metropolitan Opera 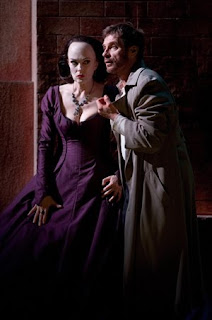 Tonight, we're seeing Hamlet at the Metropolitan Opera.  We had planned to get $20 orchestra seats via the Agnes Varis and Karl Leichtman Rush Tickets program . However,  I received comp tickets from the Met thanks to my membership in the Independent Theater Bloggers Association!

Hamlet!  It hasn't been at the Met in 113 years.  It's a five-act French opera by Ambroise Thomas that premiered in 1868. Louis Langrée conducts.   Simon Keenlyside plays the brooding Danish prince.  Jennifer Larmore plays Queen Gertrude and James Morris plays Claudius.   Natalie Dessay was previously announced to play Ophélie, but pulled out at the last minute due to an injury.  Marlis Petersen came in a mad dash, no pun intended, to save the day.

Marlis spoke with All Things Considered about performing Ophélie on such short notice.  Click here to listen.
at 2:42 PM