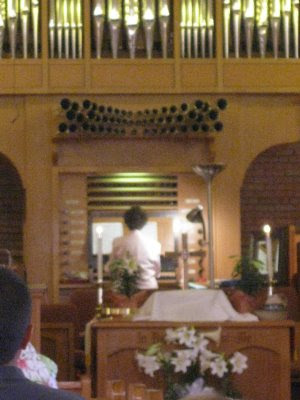 The great lady sitting at this pipe organ is Elizabeth Horner Miracle.  I just learned that, after over 50 years as a church accompanist, she is retiring from First United Methodist Church of Kermit, Texas.

I first met her at church when I was a pre-teen.  We had inherited our great grandmother's piano when I was in eighth grade.  I longed to play the piano, but it was my sister Mary who started taking lessons from Mrs. Miracle (then Horner) almost immediately.   Funnily enough, Mary was the spitting of her at age five, as evidenced by a portrait of herself that hung in her dining room.

I was already playing French horn in band and I guess my parents didn't realize my desire for piano too.

I would attempt to play after church services - somehow I picked up Fur Elise and a few other pieces by ear.  Mrs. Horner noticed me and finally convinced my parents that I should take lessons too.  I started lessons in earnest when was a freshman.

I was never very good - playing more from ear than by sight - but I did have the joy of being able to sit down, read sheet music and actually play a full song even if somewhat choppily.  I served as the Kermit Downtown Lions' Club Sweetheart when I was a senior in high school, a job she put me up for - it entailed accompaning the men while they sang the Lion Song and other popular tunes and then I would play "dinner music."  I can still play My Country 'Tis of Thee, My Bonnie Lies Over the Ocean and The Eyes of Texas from memory    It was not only fun but an honor.   She also managed to teach me enough to get me into a competition in Odessa - a harrowing experience, but somehow I did it.

In the summer time, she taught me to play pipe organ - or at least she tried.  I did play at Christmas a time or too and often served as her page turner.    It was all a thrill to me to be at her side.

Also a French hornist in her youth, she often tutored me on horn and also accompanied me in solo competitions, including at State UIL.   She accompanied for the entire band and choir and at school musicals as well.

Sometimes, she would even take a group of us to see a movie or have a meal in Odessa, a treat to say the least.    Her thousands of students were extremely fond of her to say the least, not to mention all of the worshippers who enjoyed her accompaniment and sacred music solos at services.   Her tiny music room was a sight to behold too - three pianos were crammed in along with a love seat and an asortment of mutts - including Alice, a St. Bernard and Basset Hound mix badly scarred from the mange, who never missed a lesson.

Liz also played for my Dad's funeral in 2000.  At our request, she included a joyful rendition of the Marine Corps Hymn.  She told us that she had never been that nervous in playing.   But that was her - she knew what it meant to us.

There are few people from my youth who I admire more than Liz.  I spent many happy hours in her presence, learning about music and life in general. So, I wish a very happy retirement to her.   I hope her beautiful fingers are not completely idol from music.
at 1:22 PM

Brava to our mentors! I hope you send this to her.

Oh, I have so many wonderful memories of piano lessons from Mrs. Horner (later, Mrs. Miracle :-)! What a wonderful lady! I remember she had something like 6 dogs and several cats when I first started lessons at 7, and she would let me play with them before and after lessons. Even though my hands are a bit different, she never dissuaded me from trying harder pieces that I might flounder on -- just pushed me harder. She's definitely one of my favorite people, and I deeply respect her. Thanks for posting this!

You brought tears to my eyes, Sarah. She is a truly amazing lady. I can't think of a time when I didn't know her. I remember piano lessons when I was in 2nd grade. I didn't get to continue them because we moved, but I vividly remember sitting beside her on the bench.

She played at both of my grandparent's funerals. Something about her knowing them and it being important to her made it even more special.

When Mom told me that Liz wasn't going to play at church anymore, I almost couldn't believe it. I can't think of a time that she hasn't occupied either the piano or the organ bench...

She's a wonderful human being and I count myself very lucky to know her.

Thanks for posting this and sharing it with me. Best to you!

Sarah, I took lessons from Mrs. Horner (now Miracle) for 11 years. She played at my wedding, and her favorite inside joke was to play a dressed up version of "Send in the Clowns" when the groomsmen were coming into the auditorium. She is a dear dear lady and I hope she is in good health--I used to get Christmas cards but hadn't heard from her in a long while.

Sarah Beth, this is a wonderful tribute to an awesome woman. Besides her many years of service to the FUMC, her students, and the community, Liz taught music to thousands of eager you elementary school students. She educated, inspired and instilled in them a love for music. It was enlightening to see her interact with her students. Happy retirement again, Liz. May God continue to bless your life.