Tonight: The Ovsky's at Carnegie Hall 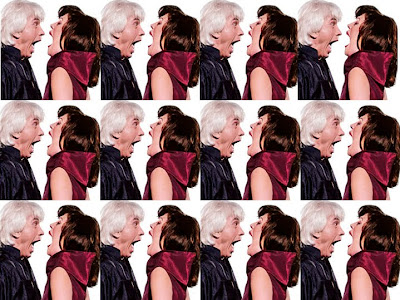 I stole this picture from Opera Chic, who borrowed the original shot from Pavel Antonov. New York Magazine talked to the Diva and the Divo - the 'Ovsky's as I like to call them - "Sassy soprano Sondra Radvanovsky and smoldering Siberian baritone Dmitri Hvorostovsky—opera’s best friends forever—talk to Rebecca Milzoff." They are fun to look at and read about, but they are even more fun to listen to and tonight that's what I'll do at Carnegie Hall.


I saw them in Il Trovatore at the Met last season, twice.  And that wasn't enough.   I'm silly with excitement for tonight!
at 12:46 PM

Was this recital all that you hoped it was going to be? I think that Radvanovsky and Hvorostovsky are perfectly coupled in the dramatic Verdi operas, and I hope to hear more of them in the near future from the Met. While Radvanovsky is not Joan Sutherland, she is the ideal Verdi soprano of our generation. I think that Marcelo Giordani belongs with them as an ideal Verdi artist. He is so very vesatile, for he is ever crossing between Verdi, Puccini, and Bellini, yet he manages to still offer some of the lighter French roles as well. he is an amazing tenor.