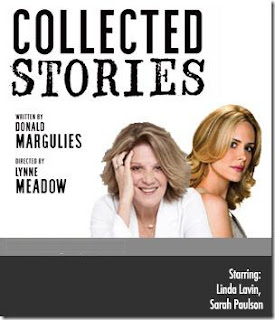 Collected Stories , by David Margulies is a two person play about a writer, who doubles as a professor, and her student.  It stars Linda Lavin and Sarah Paulson

I took in the play at Manhattan Theatre Club upon the invitation of the press office through my affiliation with the ITBA .   I was thoroughly delighted to accept, having been a fan of Linda Lavin for some time.

Its a thoughtful play chocked full of one-liners and laughs.   The student, played by Paulson, matures scene by scene, thanks in part to the influence of Lavin's character, the professor.   It begins with a tutoring session and ends with the student's success.   The two grow in to more than just teacher and student, with a few bumps along the way.

The professor is a noted author of short stories.   This character is impatient, wise-cracking and smart.  Her one-liners are memorable and I couldn't help but laugh out loud aided by Lavin's deadpan delivery: "Thelma Ritter would play me in the movie" and "Life is too short for the New Yorker."    When she shares her own story, Lavin's delivery is gut wrenching.  When she is angry, the tension is palpable.   There's no wonder that she has been nominated for a Tony Award for Leading Actress in a Play for this portrayal.

Paulson is fine as the student.  It's interesting to see her move from mere adoring and very nervous student to protégé to finally colleague.   Having been in the position of idolizing a teacher, I easily related to her eagerness to please.    As she comes into her own, however, she still wishes only to please the professor and wants her approval.

The play centers around the journey of writing fiction and the measure of success in doing so.   At times, certain monologues, particularly those of the professor, sound too literary but it doesn't detract from the story itself.   Rooting for a happy ending, I found myself surprised at the outcome and, without spoiling it for you, can't quit thinking about the consequences of the action of the student and whether or not she had the right to do what she did.

This is Margulies' second play at Manhattan Theatre Club this season  - the first was Time Stands Still.  I also saw that one and found it to be preachy and boring.   To my surprise, it is the one that has the Tony nomination for Best Play.  This one, Collected Stories, is the one I like and think is definitely worth seeing - both for the performances and the story, not to mention Santo Loquasto's scenic design that has you wishing you lived in the professor's apartment.

Collected Stories is playing at the Samuel J. Friedman Theatre on West 47th through June 13th.  Discounted tickets are available via BroadwayBox.
at 3:19 PM