The Forest at Classic Stage Company 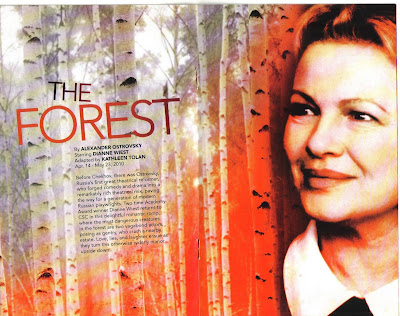 Currently on stage at Classic Stage Company until May 30th is a production of THE FOREST, starring two-time Academy Award winner Dianne Wiest and Obie Award-winning actor John Douglas Thompson.

THE FOREST  was written by Alexander Ostrovosky, translated by Kathleen Tolan, and is directed by Brian Kulick (Artistic Director of Classic Stage Company.

The cast of THE FOREST also features Adam Driver, Quincy Dunn-Baker, Herb Foster, Lisa Joyce, Lizbeth MacKay, George Morfogen, John Christopher Jones and Tony Torn.  Scenic design is by Tony Award winner Santo Loquasto, with lighting by Tony Award winner Peter Kaczorowski, costumes by Marco Piemontese, and original music and sound design by Christian Frederickson and Ryan Rumery.
The playwright, Alexander Ostrovsky, is a Russian who seemed to take his que from Shakespeare.  In fact, he translated many of Shakespeare's works into Russian.    The Forest is a mix of comedy, moralism and romance.   It's the story of  Raisa, a wealthy, controlling woman whose heirs are a poor niece and an absent nephew.

Dianne Wiest's Raisa attempts to manipulate situations with her money and power, guilting her niece played nicely by Lisa Joyce (who I saw in  Love, Loss & What I Wore) into a marriage with a young yet poor nobleman, played by Adam Driver.  The niece would rather marry a poor woodsman, Quincy Dunn-Baker, but she has no dowry.  Further complicating matters is that Raisa really has designs on the young man herself, while her niece wants nothing to do with him.  This is also funny because he seems to be quite the doofus and fool, yet the much older Raisa can hardly contain herself in his presence.

While LaQuasto's simple yet evocative set is beautiful as is Dianne Wiest's costume by Marco Piemontese , the first act drags dreadfully.

Finally, in the second act, the play picks up with the return of the prodigal nephew, who as it turns out , is  scandalously, an actor.  He is played very well by John Douglas Thompson, and is joined by Tony Torn as his fellow thespian.   Thompson is the tragedian while Torn is the comedien.   For me, these two stole the show.    They were very funny, particularly Torn, and their delivery was perfect.

The two arrive, weary from the road but determined to borrow - or take - money from Raisa, but pose as decorated military man and his butler.   They manage to mix things up and force a profitable outcome, for themselves, as well as happy endings for all concerned.

One of the most memorable theatrical experience I've had was seeing the first preview of  Memory House at Playwrights Horizons with my mother in 2005.  From start to finish, Dianne Wiest baked a pie on stage!   It was also a great story.  It turns out that the translation of The Forest was done by Kathleen Tolan, who wrote Memory House.    It's exciting to see Dianne Wiest in anything, whether its baking a pie, or at CSC in period costume - her voice and spirit are enthralling.   I could not pass up the invitation from CSC's press office to see Dianne or see another production at CSC.

I love going to CSC.  It's at 136 E 13th Street, just south of Union Square Park.   It's a great intimate venue for catching productions of the classics in New York City.  There's also great coffee house right inside the lobby of CSC:  Everyman Espresso.  I had one of the best tasting - and prettiest - cappucinos in my life before seeing The Forest. 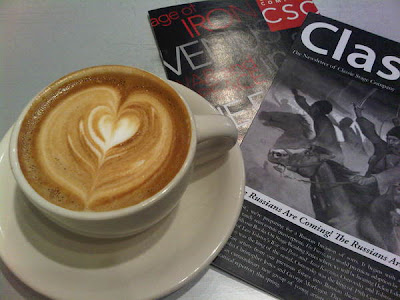