See the world with Bernadette 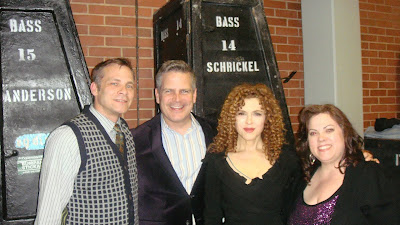 My friend Karen once told me that she sees the world with Bernadette Peters.   I seem to fall into this category as well.  Counting up, I think I've seen Bernadette perform her concert show twice in Boston, MA, twice in New York City, once in Long Island, NY, once in Bethlehem, PA, once in Bethesda, MD, once in Houston, TX, once in Philadelphia, PA, once in Peekskill, NY and most recently in Minneapolis, MN.  I'm not sure where she'll take me next, but I'm happy to pack my bags.

The most recent venue was at the Orchestra Hall in Minneapolis with my dear friends Steve on Broadway and Doug.  Once again, I was with folks who had never seen her perform in concert.  And just as I knew they would be, they were completely delighted.   They are big fans of Gypsy and Bernadette's 2003 cast recording

happens to be the one they listen to more than any other recording.

Bernadette sang her standard 60 minute show - a little Rodgers & Hammerstein, a couple of standards and of course Sondheim.  With Bernadette, you know what you're getting and it's a sure thing.   For this particular evening, she wore the purple Bob Mackie design that's covered with over 15,000 sparkling Swarovski cyrstals.  However, all of those cyrstals couldn't out sparkle Bernadette.   We all know she looks terrific, but she also sounds terrific - silvery tones mixed with thrilling and emotion laden belting.   She knocked our socks off with Being Alive.

Another thing I love about Bernadette is that she's every bit as nice and genuine as she is beautiful and talented.    I surprised Steve and Doug with a backstage visit to meet her.  She spent time with us, talking about dogs, her new book Stella is a Star

and Minneapolis.  She recalled the time when she was 13 years old with the touring company of Gypsy and they played in the area just two or three days before Christmas and she remembered there being snow and how beautiful it was.   Steve told her he had recently seen Carol Burnett and she shared an anecdote about Carol plus re-enacted one particular appearance on Carol's show.

Steve also shared with her the fact that I had the choice of visiting them for Bernadette or Patti LuPone in June.  Thank goodness he added, "It took her less than a second say Bernadette."   She laughed and said, "Oh, you chose me!"   My quick response was, "Bernadette, there really wasn't a choice."
at 1:50 PM