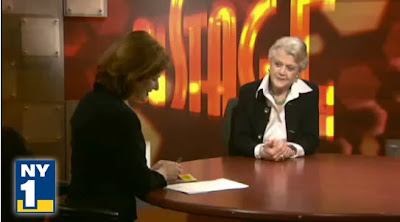 Roma:  Did you know that you were a singer, and of the caliber that could make it on Broadway.

Angela:  No, I didn't.  I didn't know until I was hired by Stephen Sondheim to sing the role of Cora Hoover Hooper in Anyone Can Whistle.  So, that, I had to work at it.  I had a very true voice, as they say, a soprano voice.  But I didn't have the big chest tones that were required, because in those days we didn't use body microphones, we only at the foots and the shotguns on the sides.  Consequently, it was required if you were going to sing over the top of an orchestra that you had the power to send the tone out.  So, I just got a lot of practice, a lot of help, not any particular training, not really.  I just did it."

Email ThisBlogThis!Share to TwitterShare to FacebookShare to Pinterest
Labels: Angela Lansbury, Quote of the Day, Sondheim

I love it! Thank you so much for this wonderful interview with Angela!