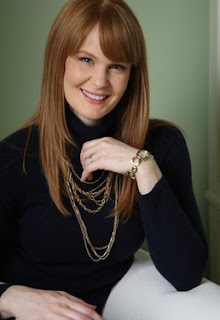 Just over two years ago, I was championing Kate Baldwin and asking Broadway why she wasn't cast as a leading lady on Broadway.   Finally this season with the revival of Finian's Rainbow

, Broadway audiences had a chance to know why she belongs in the star category.

Yesterday, she was nominated for a Drama Desk Award!  This morning, she is a Tony Nominee for Leading Actress in a Musical!

Next month, I'll  be seeing Kate in her London debut in the new Hal Prince musical Paradise Found at the Menier Chocolate Factory.    In the meantime,  I'll continue to listen to her glorious debut solo album Let's See What Happens

while cheering her on.   Brava Kate!  I'm so proud and happy for you!

Very well-deserved nomination! Thanks for "introducing" me to Kate Baldwin's talents, Sarah.

Me too, I love her album. That first song grabs me, I listen to it all the time. And you're going to London. What can I say, International Blogger! :-)

She truly is the darling of the day.