Lulu at the Met Opera 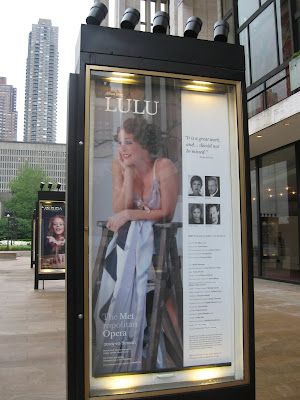 Yesterday, Sally took advantage of the Varis Rush Program (we love you Dr. Varis!) at the Met Opera so that we might see one last opera of the 09/10 season.   It was Lulu by Alban Berg starring Marlis Petersen, James Morris, Anne Sofie von Otter, Gary Lehman, Michael Schade and Bradley Garvin.
Sally sold it to me as the "anti-Puccini".   My previous exposure to Berg was via both Susan Graham and Renée Fleming recitals.  Berg based his libretto on the plays "Earth Spirit" and "Pandora’s Box" by Frank Wedekind (hey you young theater nerds, he's the writer of "Spring Awakening" too) and what a story it is!
Basically, "Lulu" is a black widow played by Marlis Petersen.  She has been plucked from the gutter by Dr. Schon, played by Silver Fox James Morris, who puts her in school - sort of a very, very dark Pygmallion, but Eliza has nothing on Lulu.  She becomes a performer and men - and at least one woman, Countess Geschwitz played by Anne Sofie von Otter, fall at her feet.  She knows how to give them what they want...except that they keep dying, not necessarily at her own fault.   She eventually marries Dr. Schon, which only leads to her downfall back to the gutter.    Before her fall though, she even marries Schon's son Alwa, played by Gary Lehman.  She takes him, and the other remaining lovers, right to back the gutter with her.    In the third act, James Morris also gets a chance to play Jack the Ripper which is bizarre but fun in a macabre way.
Some of this is spoken which makes it feel very much like musical theatre.   The staging is intimate - much of the enormous Met stage closed off effectively by gorgeous curtains and a blackbox feel.   The set is rich and appropriately turn of the 20th century, as are the costumes.   Both set and costumes are by the late Jocelyn Herbert (1917-2003) and are among my favorites I've seen on any stage.
Much of the music is atonal and the program notes warn, "The score of Lulu contains no melody in the conventional sense."  That's true, but it's lush and very full.   The Met Orchestra, under the baton of newly appointed princiapl guest conductor Fabio Luisi  sounded fluid and sweeping, without overpowering the singers who rarely Sing Out Louise in this German work.  The atonal times are jarring though - sometimes when the entire cast is singing, it sounds like a herd of cats in heat.   But don't let that keep you from going - it's brief when it happens.
I loved the cast.  Marlis is fantastic - so charismatic and she sounds perfect.  Lulu is a very dirty and sexy girl and Marlis doesn't hold back.   James Morris is dapper and sexy as her patron, soon to be husband  - he attempts to resist her charms very humorously.   Gary Lehman, who we saw as the body slamming Tristan in 2008, is great as the fawning son.  I loved Anne Sofie von Otter in this - partly because her mezzo is fabulous but also she can act and wear a character costume like nobody- in this, wigged and draped in black couture, she looks sort of like Liza Minnelli in Cabaret.   Click here to see Ken Howard's official and absolutely gorgeous production photos for the Met.
There's only one more chance to catch this opera at Saturday's matinee.  In fact, there are only four more performances at all in the 09/10 season at the Met Opera - Carmen tonight, Der Fliegende Holländer tomorrow night, Lulu at the Saturday matinee and Armida on Saturday night.  Fortunately, Sally and I have one more chance to hear the Met Orchestra before September:  we're seeing Rock Star Deborah Polaski perform with them on Sunday afternoon at Carnegie Hall.
(PS Grace Coddington sat five rows in front of us.  She looks just like herself.   Also, somebody sitting behind us obviously payed a visit to the Opera Shop during intermission and helped themselves to a hefty squirt of La Voce - I can still smell the diva spirit now.) 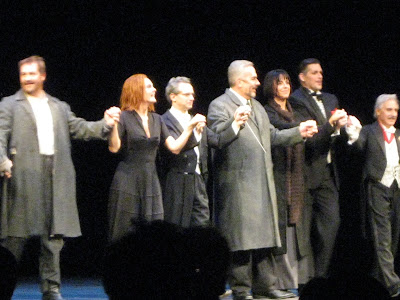