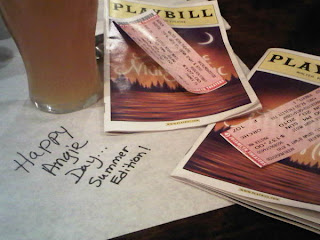 It's no secret that I complained about the casting, the lack of orchestra, the sets, the costumes and production in general of this much anticipated revival of A Little Night Music on Broadway.

But the stars aligned early yesterday afternoon.  The entire cast was perfection and for the first time, I was oblivious to all which had bothered me before.    All of the supporting cast members played their characters much more delicately and with lovely nuance than I had seen them last, which was way back in January.

Angela's "Liaisons" was nothing short of miraculous.  She was not able to hold back the personal emotions and played it with heartfelt emotion, this time with tenderness and sadness rather than sarcasm and disgust.    It was absolutely beautiful to see this rendition.  I am still savoring every second in my mind.   I could hear my fellow audience members sighing and sniffling when she was finished.  She seemed to be holding back from weeping.

Lest we forget it was her last day too, Catherine Zeta-Jones was spectacular.  She unabashedly wore her emotions on her sleeve and never held back.   At the end of "Send in the Clowns", her tears were falling freely from her eyes - as she bent her head, I could see them falling to her lap - and at the end she could only whisper the last words.  It was breathtaking.   Again, there were possibly no dry eyes in the house, including my own.  The applause was loud and long.

During the curtain call, Catherine had us all sit from our long standing ovation.  She stated that the best part of her experience of being on Broadway was getting to be in this show with Angela and that she hopes she has the career that she has. She basically turned this into a love letter to Angela and went as far as getting down on the floor of stage and bowing down to her over and over.   It was a classy and beautiful thing to see.

I'm definitely glad I went one more time, and on this day in particular - and I'm grateful to my friend Alan for assisting in getting me the great seats.    Before the show, Byrne, Kevin and I were waiting for our other friend Donald to arrive when a lady approached me and introduced herself as a follower of my adventures.  It's always fun to meet new friends! That was so fun and later she joined us for great conversation at Angus McIndoe's (over 6 hours of conversation!) (and oh my goodness - revelation, Donald is a Prettybelle lover too!).  At Angus', we saw some Broadway types and stars and best of all Brian Murray who played Lord Shrewsbury in our favorite of last summer Mary Stuart - we had just been discussing Mary Stuart when he popped in and I shouted, "Lord Shrewsbury!".  He greeted each of us and was astounded that we were still talking about that play even after a year.   It was a great topper to a great day to meet him.

What lovely pictures you took, Sarah! Thank you for them. They're a wonderful insight into yesterday's special affair. Can hardly believe this closes yet another chapter in Angela's career...one that I will continue to follow for a long time yet to come!

Thanks for these wonderful photos Sarah Beth, your always share the best with us, and I appreciate it so much!

Who curled his/her ticket and Playbill??? Certainly not you. Did you admonish appropriately?!

P.S. Very lovely story. Wish I'd been there to see it.

Just a note to thank you Sarah for posting your thoughts and the fabulous photos of Angela and Catherine. I read somewhere that Angela would only do the show if they got a big name to co-star, and Catherine certainly fit the bill. I saw the show three times and loved every minute I spent in the Walter Kerr Theatre with this cast. Catherine got her start in the West End and as Angela said "knows her way around the stage" I saw Elizabeth Taylor in the Little Foxes and Yul Brennor in The King and I, and Catherine holds her own with the best of them. What an opportunity to work with the great Angela Lansbury, I'm sure we will see them both again on The Great White Way,
thanks again Sarah!