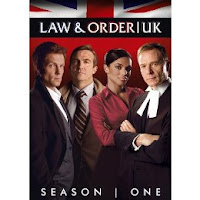 Target has the first season of Law & Order: UK, released by Universal!   Roxie picked it up for me and imported it all the way from New Jersey.  Now I'm completely addicted, just in the nick of time as my favorite Law & Order (the flagship) has been canceled by NBC.

So far, the first season has consisted of some recycled stories from the original Law & Order, but nicely worked over for British lingo and legal system, including the wigs and court dress.   It's a bit more dramatized for the starring characters as well.

When I heard of the series, I hoped that BBC America would pick it up, but since it's ITV, I came to doubt that.  When we went over to London last fall, I was hoping to catch an episode or two on the telly during downtime in the hotel (but only ended up watching Murder, She Wrote on BBC Two - not that I'm complaining). Now, Universal that has released this season on DVD, hopefully they will release Season Two as soon as possible.