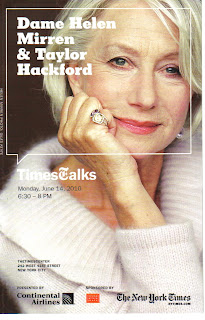 Sally, Kari and I sat on the first row center for Dame Helen Mirren and her husband Taylor Hackford at TimesTalks on Monday night.   THRILLING!    They have been together for twenty six years - they met when he directed her in White Nights.  Their new movie, Love Ranch, is coming out later this month and he directs her once again.

It was like being granted the privilege of eavesdropping on a conversation between a mutual admiration society of two very smart, charming and successful people. In person, Dame Helen is so beautiful and very lady like!  She's also surprisingly small too.

The best take away of the evening:  during the audience question period, Dame Helen said that she hopes and thinks that she may be coming back to Broadway in a play next year!

When the interview was over, she forgot her little purse  at her chair, Taylor went back to retrieve it for her - he quipped to those of us in ear shot that this was a usual thing.

Listen to the podcast here . A televised broadcast will air on CUNY-75 in New York beginning on June 25th.

Well, now I've seen everything.
Helen Mirren and Joe Pesci on the same bill. Amazing. Interesting to hear Helen speaking with an American accent. Can't wait to see this film.
I am a Helen Mirren film collector!