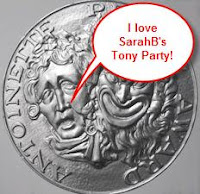 It wasn't my favorite Broadway season, but I still wanted to celebrate Broadway's Prom Night with some of my nearest and dearest.  Fortunately, these friends include some of the biggest theatre nerds around and at least one person in the room at seen at least one of the nominated shows.    Although my favorites didn't win, Sean Hayes did a fabulous job as host and it was exciting to at least see everybody looking so lovely and excited on television.

We gathered at the Regency Hotel again, this time suite 1820 which was a bit roomier than last year (it's almost as big the house I owned in San Antonio and infinitely fancier and larger than my Upper Westside apartment).    Roxie and Chelsea joined my decorating team - this year it was nice being the foreperson.  A friend catered the evening and the champagne flowed.  I banned twittering, although I did allow for a "Twitter Corner" in case someone just couldn't help himself.  To celebrate my 5th Tony party, I kicked up the swag, and included a silver framed photo of  Mr. Sondheim, a copy of RED or God of Carnage, a show magnet, a Sharpie and a button.  There was even a red carpet for all of the star arrivals!