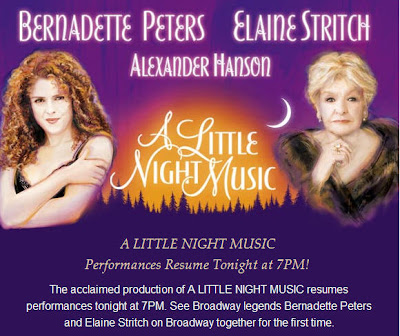 Oh how I envy you!

(The picture would almost make one think that Bernadette would be wearing her favorite Mackie dress while Elaine would be spending her weekend in the country in her Black Gamma!)

Did you enjoy the show last night, Sarah? I saw the photos of Opening Night on BroadwayWorld, and they're nice pictures. I notice Bernadette's costume is identical in looks to the one Catherine wore, but Elaine's costume looks different than the style Angela wore. I was curious to see what Elaine's black dress looked like in the first act, but can't find a picture yet. It seems I'm always very interested in costumes and hairstyles.