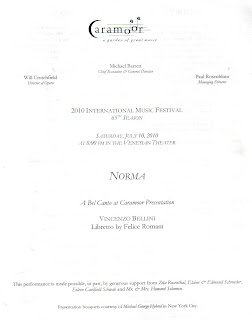 Overnight text message from Noah:  "Do you now agree that Norma is the reason for opera?"

YES!  MY HEART IS STILL POUNDING!

Sally and I took the "caravan" bus from Grand Central Station to Caramoor, in Katonah, New York.  It took only a little over an hour through the Bronx on the Major Deegan and up Hwy 87.

The Caramoor grounds are so pretty (not as fancy as Ravinia, but far superior to Tanglewood).  Many people brought their own picnics, but there were also delicious, fairly inexpensive sandwiches and salads available for purchase.

We arrived just a little too late to enjoy the "Bel Canto a Due," a recital by the Caramoor Bel Canto Young Artists and Apprentices, but we certainly could hear them.   As Sally and I wandered around the grounds, we could also hear the sopranos warming up backstage at the Venetian Theatre.

At 7:00 p.m., we attended Andrew Porter's introductory lecture about Norma.  He was a British music critic and delivered a humorous history of the piece and the various sopranos who have sung the role.  He even saw Maria Callas in the role several times over the years.

Finally, at 8:00 pm, we shuffled into the Venetian Theatre, under a large tent.  The rake is fine in the makeshift theatre, but if you are counting on sur-titles, try to sit as center as possible as the tent poles blocked our view of the screen in at least a foot of the text.  I was fine to just listen, but this undoubtedly bothered at least one patron who gestated wildly in his seat right in front of me for the entire evening.

But the music made up for any irritation from the audience.   Under the baton of Will Crutchfield, who is a bel canto specialist, the St. Lukes Orchestra was fabulous.  We saw them arriving via a bus like ours, not realizing that's who they were.   They looked rather ragtag, but that had nothing to do with their musical ability.

Emmanuel di Villarosa, the tenor, played "Pollione."  He was okay but had a few pitch - it sounded like he wasn't quite warmed up.  When he hit though, he hit and it was fantastic.   Bass-baritone Daniel Mobbs played "Oroveso" and I thought he was great.   Rounding out the cast nicely were Sharin Apostolou as "Clotilde" and Brian Landry as "Flavio."  The Caramoor Festival Chorus was also on hand.

It was going along nicely and then Angela Meade entered.  She wore a black strapless gown, layered in ruffles with just a hint of sparkle on the fabric.  She has slimmed down and the dress was very flattering.  She was wearing some major bling too and looked ultra glam.   The minute she started singing, I thought the temperature dropped.  It turned out that I was merely covered in goosebumps and my spine was tingling.   She has amazing power with a gorgeous full sound, but then floats the most unbelievably light pianissimo it's like tiny butterflies fluttering.   After every aria, the audience was screaming and applauding and stomping feet.

We went for Angela Meade, but the bonus of the evening was Keri Alkema.   Keri wore a blue strapless gown with a sheer shawl. She was also wearing her share of bling.  She's got a beautiful full mezzo with quite a range.   When she and Angela sang together, I thought I would just pass out and admittedly I did cry.  I couldn't help myself!

It's a long, relentless opera for the singers and every moment was thrilling - just when I thought it was over, they would keep singing with soaring vocal fireworks.  Angela was powerful from the get go and only became stronger.   When we were leaving, I told Sally that just like Andrew Porter talking about Callas, we'd be talking about the first time we saw Angela Meade.

We saw a few notables in attendance including Matthew Epstein and a critic from the Post, as well as some faces I recognized from the Upper West Side and/or the Met Opera (alas, no Lois!).      Sally saw Michael Fabiano (one of Angela's competitors and co-winners from the 2007 Met National Council Audition) and my friend Michael Stinchcomb, who would of course be there because he, like me, see as much of the best as possible.

It was a late night, but I'd do it again in a heartbeat for a chance to see Angela Meade and Keri Alkema sing live again.  Angela is scheduled to cover Renée Fleming in Armida next season at the Met and I found myself thinking deviously that maybe La Diva will move over and hand it over to Angela.  If only.  In future seasons, Keri will be at New York City Opera and Washington National Opera and I will do my best not to miss her.

As a staff member at Caramoor, I was lucky enough to attend Norma last Saturday and was equally impressed by Angela Meade and Keri Alkema’s outstanding performances! Both the New York Times and Associated Press were also at the performance and gave it rave reviews. I have already recommended the event to my friends and they are buying tickets for Friday.