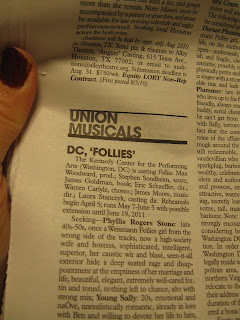 Now, go ahead and make it Donna Murphy as Phyllis.  I'll gladly buy her an Acela to D.C. if they really need her to show up for an audition.

Broadwayworld reports that they have learned that Kim Cattrall (Sex and the City) will be Phyllis.  Oy vey, here we go again.
at 12:34 PM