I do! I do! at the Westport Country Playhouse 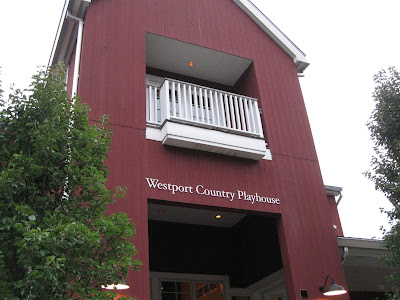 And a sure thing it was too.   Kate Baldwin and Lewis Cleale are starring in the musical I do! I do! at Westport Country Playhouse in Westport, Connecticut.

I do! I do! is a two character musical about a couple over their 50 year marriage. The book is by Tom Jones, with lyrics by Tom Jones and music by Harvey Schmidt.  It was based on the play The Fourposter. It played for 560 performances on Broadway from 1966 to 1968 and starred Mary Martin and Robert Preston (Carol Lawrence and Gordon Macrae replaced them in 1967; Carol Burnett and Rock Hudson did the national tour). Robert Preston won the 1967 Tony Award® Best Actor in a Musical.

It's an intimate production fit for the intimate and very comfortable playhouse.  Susan H. Schulman is the director with set and costumes Wilson Chin and Devon Painter respectively.   All of the action occurs in the master bedroom - action includes their honeymoon, the birth of their children, fights, plans, joy, celebration and finally moving on.

The set is simple yet terrific  - the four poster bed is center stage, but revolves to hide a little stage magic and show the passage of time.  The costumes range from a beautiful Victorian lace wedding gown to roaring twenties to 1940s ease.

Instead of an orchestra, a couple of pianos provide a lovely symmetry to the gorgeous vocals by Kate and Lewis.

50 years is a lot of decades to cover , but Schulman keeps the pace moving through the good times as well as the bad times.   Kate and Lewis age before our eyes, starting as a young couple on their wedding day and ending with leaving their home as empty-nesters.   Set from 1898 to the 1940s, it's classic and timeless without being old-fashioned.

Particularly touching was their performance of  My Cup Runneth Over in act I.  In 1967, it was recorded by Ed Ames and hit the pop charts.  It's also been covered by many performers including Perry Como and Kate Smith.  Many of the patrons seeing the show on Saturday night were of the senior set and undoubtedly recognized the tune - a rather loud murmer of approval spread across the audience.

The most fun came with the number "When the Kids Get Married," in which Kate and Lewis romped around their bedroom, dancing and cavorting with their excited plans for when they'd finally have the house to themselves again.  The number calls for her to play the violin and him to play the saxophone.   Hysterically, Kate did her best, although we may have discovered that there is actually one thing that Kate cannot do.

Tom Jones' book provides plenty of acting opportunities for both Kate and Lewis.   I always love hearing Kate sing, but it's doubly exciting to see her act and convey emotions from wonder to anger.   Her character "Agnes" is always the heroine and Kate makes it easy to see why.   Her turn is fun, thrilling and heart-warming.   It was my first time seeing Lewis in a production and I found him to be very likeable and charming with a solid delivery.  They play off each other nicely and the show is a joy.

I do! I do!  has extended until September 4th.    It's an easy trip from New York City, or I imagine anywhere on the north eastern seaboard.

The Westport Country Playhouse opened in 1931, but began life as a cow barn in 1835.  Over the years, a number of productions opened at Westport first before moving on to Broadway.   Being less than 2 hours away from New York City (by car, unless in heavy traffic like we hit), the playhouse was a mecca for legendary actors.  By 2000, the playhouse had seen better days  but Joanne Woodward became the artistic director and turned things around with a major renovation and artistic renaissance.

The walls of the lobby and backstage (Kate took us on a backstage tour) are covered with posters and photos from all of the years.  My heart pounded as I saw so many photos of legends, showcards, and memorabilia of what had played there.    And now, Kate and Lewis add their own photos those those hallowed walls.