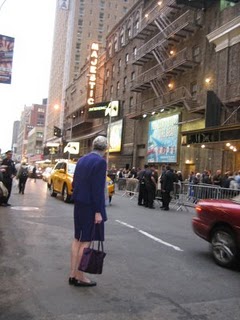 "If I have a theatre ticket, I'm happy all day long," confesses veteran stage actress Marian Seldes with a schoolgirl giggle.

- Marian Seldes, in "The Play's the Thing": Getting Butts in the Seats by Ashley Wren Collins, The Huffington Post, August 18, 2010

I took this photo of Marian while we were waiting to cross the street for the opening night performance of  Equus on September 25, 2008.  I've been lucky to be in the theatre with her on a number of occasions - both when she was an audience member and when she's been on stage.   Both experiences are equally thrilling and inspiring.

I was glad to greet Marian and wish her a happy birthday - she had just celebrated her 80th birthday in the previous month (August 23) .  She told me that she had been to the dress rehearsal of Equus the day before as well.    Marian played "Hesther Saloman" and later replaced Frances McDormand as "Dora Strang" in the original Broadway cast of Equus in 1974.
at 3:03 PM

Email ThisBlogThis!Share to TwitterShare to FacebookShare to Pinterest
Labels: Marian Seldes, Quote of the Day

Ok, I'll bite. Who's the lady in the purple suit trying to cross the street? Or was the focus of the picture a street image and Majestic Theatre?

The Lady in the Purple Suit is Marian Seldes...I posted before I went back and added another paragraph.