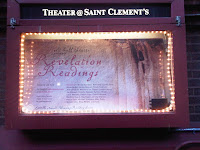 Maugham's play Our Betters is rarely seen, perhaps for good reason.  During World War I, the British Foregn Affairs Office "feared it as 'Anti-Amerian' and didn't want to risk losing American support."  Maugham wrote it in 1917, but it wasn't published until 1921 or produced until 1923.  It tells the story of a group of Americans who have taken residence in England.  The women have done so via marrying English nobility in need of money - marriages for convenience and status.   It specially tells the story of a group of American women who seem to care only about status and a carefree life of wealth and are willing to gain this lifestyle through the manipulation of even their own family members and closest friends.    Conversely, those manipulated seem to know it's happening but accept their assignation.

While its a bit long and repetitive, it's not entirely humorless.  It's full of delicious sarcasm.   Even though this was just a reading, director Stuart Howard staged it nicely with groups of chairs and cast members dressed appropriately to what their station in life might be, even if in contemporary clothes (Tovah wore a diamond necklace to die for).   It's fun to see what actors can do with just a reading, giving you a glimpse of what it might be like if they were off book - all of the facial expressions and gestures are there, especially by Tovah Feldshuh, Michael Urie, Julia Coffey and of course, Joanna Gleason.   In fact, the best moment of the evening came with a flub by Joanna - she had the audience in stitches with just the smallest wave of her hand.   Tovah was riot as an insecure older woman with a very young lover.  Michael Urie was delightfully droll as he delivered as the unattached entertainer of the group, so wealthy that he had nothing else to do.

Seeing Julia Coffee  in a production again was a treat.  I loved her in last year's The Widowing of Mrs. Holroyd, also directed by Stuart Howard.   I don't know if its just that she's an amazing actor, full of poise and grace or it's that Stuart brings it out in her.  I have a feeling that it's both.   Julia might be one of those actresses who can bring it in any occasion.

In a fun turn of casting, George Akram was cast as the gigolo dance instructor "Ernesto."  "Ernesto" was talked about with much swooning by Tovah's character "Duchesse Minnie."  He makes his entrance at the very end and wins her over.  George plays "Bernardo" in the current Broadway production of West Side Story.  Prior to making his Broadway debut, he was a dancer in Las Vegas.  On top of his devatasting good looks, he's one of the nicest young men on Broadway and hasn't missed a performance of West Side Story except for planned vacation.  Bravo George!

The Red Bull Theater stages their productions in the Theater @ St. Clement's.  It features around 150 raised seats in a charming setting - brick walls with stained glass window surround.  It's located on 46th Street, between 9th and 10th Avenues.   Ticket prices range from $17 for students/industry to $33 for regular seating.   Most of the readings take place on Monday evenings and draw A-list actors to their casts (F. Murray Abraham, Jan Maxwell, Maria Dizzia, Jessica Hecht, and more).  In addition, they will premier a new adaptation of The Witch of Edmonton from January 25 through February 13, 2011.
at 4:50 PM