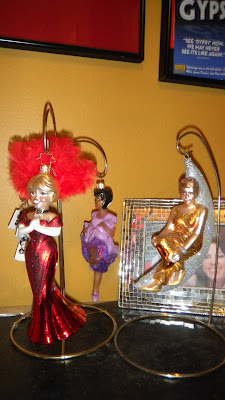 I already received the one item on my Christmas list!

Thanks to my Mom, I have added the latest  Broadway Cares Broadway Legends ornament to my collection.  First came Angela Lansbury's Mame and Chita Rivera's "Anita" from West Side Story was last year.

The latest is in the collection is inspired by Carol Channing in Jerry Herman's Hello, Dolly!   Carol first played "Dolly Gallagher Levi" on Broadway in 1964 and revived her twice more on Broadway in 1978 and 1995.  She won the Tony for the role in 1964.

Carol toured the role for years.  In fact, Hello, Dolly! was the first big "Broadway" show I saw when the tour stopped at the Performing Arts Center at the University of Texas in Austin around 1995.  I'll never forget Carol in that red dress and enormous hat singing the title song!  It was stunning!

Broadway Cares/Equity Fights AIDS is an amazing organization that funds numerous causes for actors and performers in the arts.   "Shop for the Cause" is just a tiny way of how they raise money for HIV/AIDS assistance and cure research, BroadwayBarks, and programs of the Actors' Fund, including The HIV/AIDS Initiative, The Phyllis Newman Women’s Health Initiative, The Al Hirschfeld Free Health Clinic, The Actors Fund Work Program, The Dancers’ Resource, The Stage Managers’ Project and three supportive housing residences.  BC/EFA also awards annual grants to more than 400 AIDS and family service organizations nationwide.

Guess I'll have to scratch Dolly Levi from your Christmas list!!