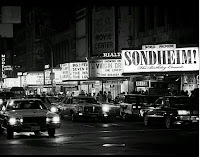 In case you haven't heard, Stephen Sondheim turned eighty years old on March 22, 2010.   Everybody from the New York Philharmonic to the BBC Proms has celebrated this Musical Theatre Great's birthday - Roundabout even renamed a Broadway theatre for him.  And there are still more birthday celebrations to come - the New York Pops gets to have their cake on November 19th at Carnegie Hall.

The icing on Sondheim's birthday cake is a present to all of us - the New York Philharmonic's two night concert in March was filmed for a Great Performances broadcast on November 24th.  In  New York, it's on WNET at 9:00 pm.

But before we get to that, we will celebrate with a dvd release of this Great Performances.  My copy via Amazon is slated for delivery on November 16th.   I can't wait to watch it and hear myself cheering from the 2nd tier of Avery Fisher Hall - I was there both nights!

I’m thrilled to have this souvenir of the blockbuster evenings. It was a dream to hear numbers performed by the original performers – Bernadette and Mandy singing "Move On" from Sunday in the Park with George and Joanna and Chip singing "You’ve Changed" from Into the Woods, as well as covers from artists who performed in revivals of Sondheim’s shows – especially George Hearn (original replacement "Sweeney Todd") and Patti LuPone and Michael Cerveris in the revival of Sweeney Todd.   Then there was the Magical Circle of Divas in Red - Bernadette, Patti, Audra, Marin, Donna and Elaine - that could have gone on all night.

And here's something that just adds to my excitement: while the rest of you have to wait at least another 2 weeks for the DVD, or for the PBS broadcast if you're cheap,  I get to re-live those two nights in March tonight when I attend a screening of the production for Great Performances, hosted by the producers Stewart F. Lane, Bonnie Comley and Ellen M. Krass.
One thing is for sure, the birthday presents just keep coming.  Thanks for turning 80, Stephen Sondheim!
at 7:00 AM