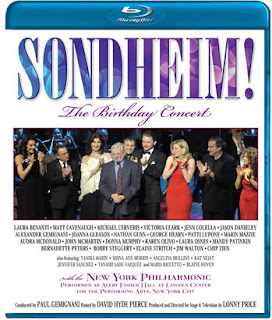 The film will be released on dvd and blueray on November 16th before being broadcast on PBS stations on November 24th.

The film was screened at the NYIT Auditorium on Broadway.  In attendance were the concert and film's director Lonny Price, as well as performers Jim Walton, Laura Osnes and Jenn Colella.   The audience applauded and cheered just as if it was live and after the credits rolled, somebody yelled, "Encore!"

The film is exquisite.  Anybody who was in attendance - I was there both nights - will rejoice of this beautiful souvenir of the concerts.   It's a combination of both nights - the West Side Story ladies with Karen Olivo perform America from the first night, as is Alex Gemignani singing Something's coming from West Side Story and Jim Walton is there performing a song from Merrily We Roll Along from the second night.   The close ups of the performers are priceless, particularly during the Magical Circle of Divas - Bernadette, Patti, Donna, Marin, Audra, and Elaine.   Even better, there are plenty of shots of Mr. Sondheim himself, reacting from his aisle seat in the orchestra section.


Although there appear to be no "extras," this is a priceless souvenir of the resplendent 80th birthday concert for Stephen Sondheim.  For those who did not attend for unfathomable reasons, lucky stars should be counted that this was filmed and is available for purchase.   It is nothing less than a must have.
at 11:20 AM