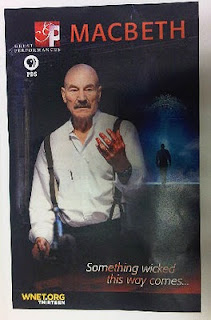 Last night, I attended a screening of Macbeth hosted by WNET Thirteen, New York City's PBS, at the Paris Theatre.   I initially thought this was a film of the stage production of Macbeth that played in the West End in 2007, then Brooklyn Academy of Music and finally on Broadway in 2008.    The production starred Sir Patrick Stewart as Macbeth and Kate Fleetwood as Lady Macbeth.  I missed it when it ran in Brooklyn and Broadway.   I was way off - this is no film of the stage production; this is a horror movie!

Tomorrow, October 6th, this film will run on PBS' Great Performances, starring the same cast as the stage production.  Rupert Goold, who directed the stage production, makes his first foray in to film direction here.  During a pre-screening talk, Goold did say that he wanted it to be a horror movie - I do believe he has succeeded.

The movie set - Macbeth's castle - looks like a post-apocolyptic hospital.  It's set in Scotland, but turned into sort of a fascist state with lots of vintage clips of military marches and torture.   It appears to be the 1950s as well, although some of the military accroutement seem current day.    Patrick Stewawrt and Kate Fleetwood are terrifying as they ascend in to madness.   However, Goold finds moments of humor, particularly in kitchen scenes where Lady Macbeth truly is the hostess and lady of the house.  It's also fun to see Macbeth make himself a sandwich.

I think because it was as actual film, it made the story even more real, possible, and ultimately frightening.   Because I've read and seen Macbeth live before, I knew what as coming, but the suspense in this film is palpable and chilling.

It was fun to sit in the audience with the star and the director - watching them watch the movie was a treat.   It seemed to receive a mostly enthusiastic response, if not with some gasps at some of the horror at the disgusting scenes.  It was impossible for me not to just laugh at some of the grossness.    I also couldn't help but wonder who got to keep the prop of Sir Patrick's severed head.

Sir Patrick Stewart is currently starring in Mamet's A Life in the Theatre with T.R. Knight on Broadway.  T.R. was also in attendance.  At least one of the 3 weird sisters, although I am not sure which one, was also in the audience.  Sir Patrick joked that if she were to hear the rustling of the backs of popcorn, which WNET handed out prior to the movie,  she might be forced to cast a spell. 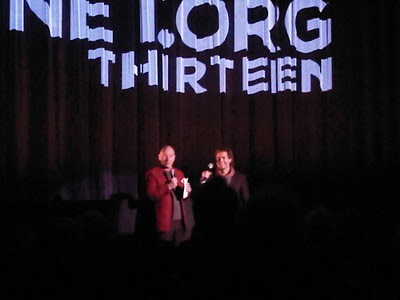 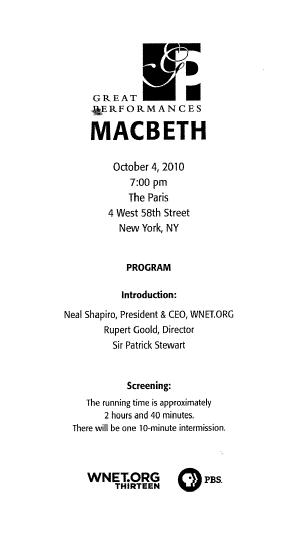 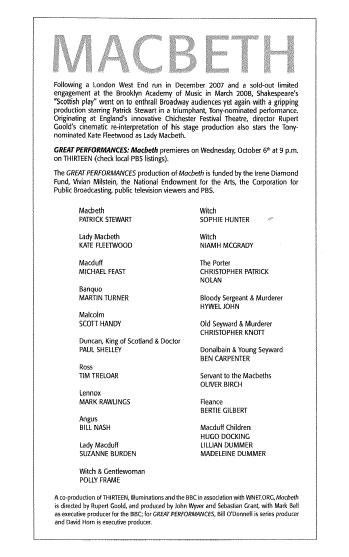