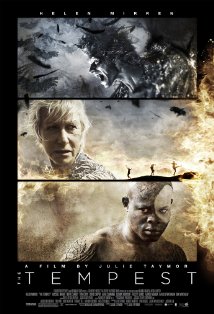 December 10th cannot come soon enough.  It's the day that the movie of The Tempest will be released in theatres (maybe sooner in New York City!).

I absolutely LOVE The Tempest.  It was the first Shakespeare I ever saw - it was at the Globe Theatre on the campus of Odessa College, in Odessa, Texas.  It was an field trip for our 8th grade Kaleidoscope class and I have never forgotten the experience - especially when Caliban jumped into the audience and practically in my lap.

I have been anticipating this movie since I heard Helen Mirren discuss it at Times Talks.    She said that she and Julie said to each other that they should do The Tempest together - Helen thought it would be on the stage but time passed and she sort of forgot about it.  Julie called her one day and said it was happening and she was surprised to learn that it was film.

So I owe you huge thanks for the tips on shows. We ended up seeing Cage and Night Music; both were as amazing as I wanted them to be, and my daughter loved them both, as you predicted. The party for the opening of the film festival/Taymor's Tempest was at Avery Fischer Hall while we were at the ballet. Were I but younger I might have tried to crash it, as it looked pretty splendid. Thank you so much again!

Yay Sybyl! I'm so glad you had a wonderful trip! (Oh man, I would have thought about crashing that party as well)

Whaaaaaa? HOW have I not heard of this??? Good god Mirren as Prospera...I'm salivating...