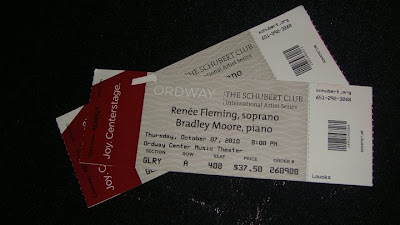 Last spring when I visited my dear friends Steve and Doug in Minneapolis, we went to see Bernadette Peters in concert.  I saw in the program that my favorite opera singer Renée Fleming would be performing in St. Paul later in the year.  The wheels in my head immediately started turning - a return visit with Steve and Doug with La Diva added to the mix?  Yes!

Unfortunately, it was not to be because of my day job obligations.  But I set to work on convincing Doug and Steve to go.   Being the good, obedient friends they are, and seeing my enthusiasm for Renée and opera, they acquiesced.  I like it when people do as I say, especially when I know they will love it.   And obviously, I didn't send them in completely blind.  I sent him Renée's album By Request

, which is the first of hers that I bought for myself (I also included her Dark Hope

just because I thought it would show them her range).  I also sent him youtube videos of her various performances and regaled him with tales of my own adventures with Renée.  I upped the ante by triple teaming him with fellow Fleming Flappers Chelsea and Roxie too.

It all seems to have worked.  Now, I just haved to get them to the Met.  You know Steve as the inimitable Steve on Broadway.   This is Steve's account of his adventure of attending his first classical voice recital and seeing Renée Fleming:

For a guy who never knew his coloratura from his singspiel, I’ve come along way – thanks in no small part to the greatest opera enthusiast in my life, Sarah.

Although my experience with opera was shamefully lacking, Sarah’s patience and exuberance helped transform my Opera 101 into quite an adventure. And the best part? I no longer view the art form as endless – as in boring – entertainment.
My lesson culminated last Thursday when I traded in my Steve On Broadway  (SOB) moniker for one with a few more whiffs of sophistication: Steve On Opera (SOO). While I didn’t exactly enjoy a full operatic performance per se, my ongoing education in opera led me to a recital showcasing the great soprano Renée Fleming.
That voice! Those vocal selections! The repartee with the audience! The lovely, flowing red and blue gowns! The chance to meet the glorious diva in person! It didn’t take me long after the recital to sum up my experience in one single word.
Exquisite.
My exceptionally exquisite evening proved to be one filled at once with both symmetry and stark contrasts.
The contrast was realized as I took my seat in the uppermost reaches of Ordway Center for the Performing Arts’ third balcony. It dawned on me that the last time I had climbed to the fourth and final level of this massive concert hall had been 11 years earlier for the furthest thing away from opera: a performance of Rent.
Unlike that Jonathan Larson musical, which blared through the speakers at an ear-shattering volume, I was finally experiencing an unamplified voice that easily carried to the Ordway’s rafters, not far above my head.
Who needed a mic, when you have Fleming’s divine voice?
Ironically, it was also Rent that provided part of my evening’s symmetry. After all, when Larson wrote his musical, he based it on Giacomo Puccini’s La Bohéme. During last Thursday’s performance, Fleming devoted the last half of her recital to the genuine article.
Adding to the evening’s symmetry was her encore that included her rendition of Gianni Schicchi’s “O Mio Babbino Caro” – an aria featured on Renée Fleming’s “By Request” recording that Sarah provided me as my earlier “homework assignment.” Prior to the recital, Sarah had asked me which track was my favorite, and I named “O Mio Babbino Caro.” In truth, it was my answer simply because it was the most familiar. But after hearing Fleming perform it live, it’s going to be hard to replace as my favorite.
Following along with the recital program’s language translation proved enlightening in and of itself. For starters, without following along, I would never have known just how dark those German arias Fleming sang actually were. While I appreciated her stunning interpretation, I was relieved once
she moved on to the lighter themes.
What the program didn’t explain to me was that there were cycles for each composer or that each cycle must be performed in its entirety for the audience to respond with any applause. During the first cycle alone, my Love Of My Life (LOML) and I looked to each other wondering why the audience was sitting on its hands. Once they applauded enthusiastically, I realized my lesson would last through the rest of the evening.
After the first ovation, Fleming left the stage. Could it be that we already arrived at our intermission? Of course not. But how were we to know?
Moments later, Fleming returned to the stage for the next cycle and another
lesson was learned.
Once the actual intermission concluded, it was Puccini’s arias when I really fell for Renée Fleming. She demonstrated a playful side that forever erased my image of opera as stodgy and devoid of humor. I was suddenly picturing how Sarah must have fallen in love with that exquisite voice on a snowy day in New York City.
Then to enjoy Fleming’s four encores, two of which included tunes from West Side Story – including my all-time favorite Broadway love song, “Somewhere” – and I was in heaven. Just when I thought I could never get any higher, literally or figuratively, there I was, floating on air, leaving the Ordway on a high note.
Thanks to my dear teacher and friend Sarah for fostering and encouraging my education. You’ve opened my eyes and ears to a beautiful singer and a timeless art form.
This is Steve On Broadway (SOB) 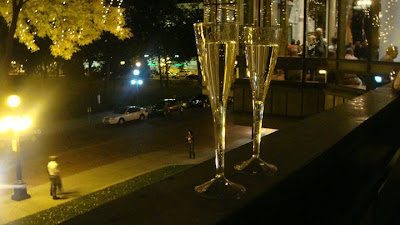 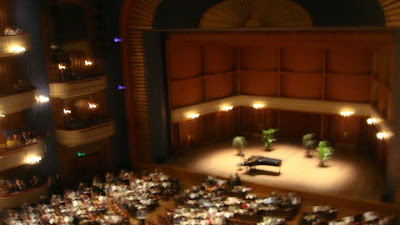 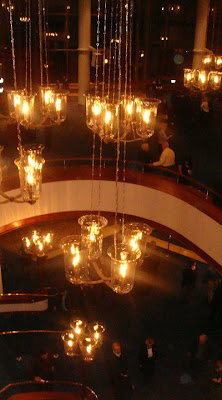 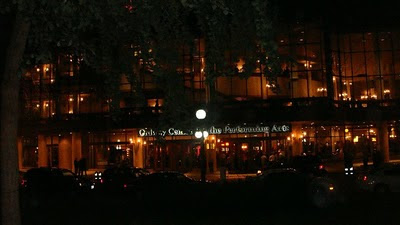 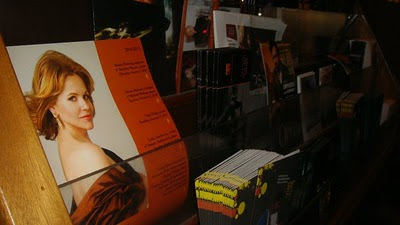 *hums Another One Bites The Dust*