Christine Ebersole - Concert at the Metropolitan Museum of Art 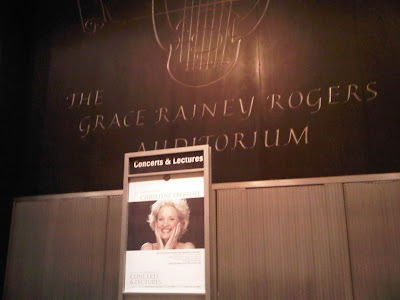 Kari, Roxie and I wandered through the Egyptian mummies and relics at the Metropolitan Museum of Art to see Christine Ebersole's concert in the Grace Rainy Rogers Audiotrium a couple of weeks ago.  Christine mostly sang songs from her new Noel Coward album

, which was inspired by her turn as "Elvira" in the 2009 revival of Noel Coward's play Blithe Spirit.

Christine only sang a few "Broadway" songs, including "42nd Street," "Too Darn Hot," and  "Can't Help Lovin' Dat Man of Mine."    She also included her rendition of the "Folks on the Hill," which I love.   The Noel Coward songs were terrific, switching back and forth between the fun and the wistful.   Christine's soprano always sparkles and her glissando is thrilling.   She encored with a fabulous Eartha Kitt's number "Mink Schmink!," sounding almost exactly like her and completely hysterical.

Christine was joined on stage by a jazz trio lead by John Oddo at the piano.  John Oddo was Rosemary Clooney's pianist for almost two decades.

Unfortunately, Christine only teased us with the promise of performing songs from Grey Gardens when she would break into her "Little Edie" voice.  She shared many stories about her beloved family, her life in Hollywood and now New Jersey, and her career...unfortunately, she spent a little too much time on the "Lectures" portion of the "Concerts and Lectures at the Metropolitan Museum of Art."

Still, I'll jump at any chance I get to hear Christine perform live.   I'm especially hoping that she and Billy Stritch reprise their annual Town and Country Christmas this year.
at 4:56 PM

I loved the show too, and as amazing as her voice is, I wouldn't trade her endearing and hilarious stories. "I vacuum." There's no one like Christine Ebersole. LOVE HER!