A Posh Week in the Endless Pursuit

Last week was posh.  The title of this little blog website is Adventures in the Endless Pursuit of Entertainment.   I love being entertained, but I'm not just seeking vapid, mindless escapism.  I'm looking for live performances and visual arts that inspire, challenge and thrill me.   I'm open to trying almost any new experience, but I also find myself returning to the known quite often as I just can't get enough. 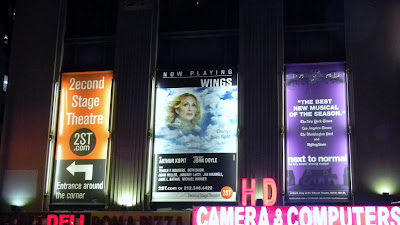 On Wednesday, I treated myself to Wings at Second Stage Theatre.   I went for Jan Maxwell, who is one of the most miraculous actresses around.  In my opinion, she can do anything and she proved it once again in this jarring story about a woman who has suffered a stroke.   It's a terrifying performance and story.   I was trembling from the onset and I hope that neither any of my loved ones nor myself ever suffers a stroke.   Visually, it was a hectic mix of multi-media sound and projection.  It was just as overwhelming to see as what the character was experiencing.  Then when she began to recover, the pace seemed to relax as well.   Still, it was an extremely intense theatrical experience. 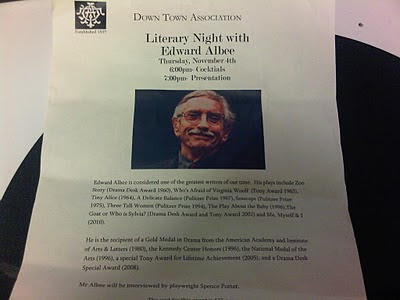 On Thursday, my friend Kaitlin invited me to the Down Town Association (FDR was a member!) for a "Literary Night with Edward Albee" and dinner afterward.   It's an elegant, venerable establishment and I enjoyed the experience very much.  Albee is my favorite playwright - I've loved Who's Afraid of Virginia Woolf, Seascape and The Occupant.  I especially loved reading Three Tall Women and would love to see a revival of it.    I enjoyed talking to him about The Occupant, especially in relation to his statement that he doesn't write about real people, only fictional.  The Occupant was about the late Louise Nevelson, a sculptor and a friend of his.  He said that he was able to use her as a character because she was already a fictionalized version of herself and that he could never really know her.   He thanked me for my question and was pleased that I liked the play.

Albee spoke of his own writing practices and  how he lives with characters for a while before he ever puts them down on paper,   how the suspension of disbelief is essential for theatre, and the importance of knowing classical music and other visual arts for playwrights to "compose" a play.  He said that he is influenced by everything he experiences in the arts and it's up to us to decide what we are going to accept or reject.

He verbalized some that I have been unable to explain about my own theatre going habits:  "any work that you only see once and 'get,' must not have much content."    Perhaps this is why I am apt to see certain shows or programs multiple times.

The good news Albee imparted is that he has at least three plays in head that he hasn't yet written down and wants to do - he said that will take the next four years.    He said that good, important work is still done although it's hard o have it paid attention to in this media era of the soundbyte.   He aid that it's harder for a serious play or art to survive amongst the "junk" becasue that's what people want to see - that most people do not want to have their values questioned or challenged and would rather just be enterained in an escapist fashion.

I, for one, do need to escape - fortunately, it's this sort of work that I seek for the experience.

On Friday night, I went to see The Scottsboro Boys with Noah.   It's a new musical by Kander and Eb based on a group of young, black men who were wrongly accused, convicted and imprisoned for raping two women in Scottsboro, Alabama in the 1930s.   Kander and Ebb employ the minstral show as a means for telling this horrifying story.

I still don't quite know what to say about it.  It's good - beautifully acted, sung and the actors are amazing.   But it's shameful and upsetting as well.  The use of traditional minstral is an interesting juxtaposition as the means of telling the story simply because the era of the black performer having to perform as minstrals was completely degrading.  Yet, despite the degradation, it's beautiful.  The dancing is thrilling and the music is delightful - until you listen to the lyrics.   The lyrics slam you with an understanding of the horror that these men experienced.

The whole experience of being in the Lyceum for The Scottsboro Boys is definitely staying with me.     Plus, the theatricality and the direction and the very simple set is still astonishing me - Susan Stroman is nothing short of brilliant with this production.

On Saturday night, Kari and I headed to The Whitney Museum's member night.   The allure of the new exhibit of Edward Hopper and his contemporaries plus the promise of a cash bar and live jazz was more than enough to travel all the way to the east side.    Before going in, we serendipitously caught the fireworks show for the New York Marathon - perfection for a beautiful, clear night over Central Park.   The Hopper exhibit is divine - I loved being introduced to paintings by John Sloan and particularly Martin Lewis' Shadow Dance.    I especially loved seeing Robert Henri's portrait of Gertrude Vanderbilt Whitney, the founder of The Whitney.   I've seen small postcard side print of the portrait, but seeing it so large with all of its vibrant colors was breathtaking.

After The Whitney, we headed to Bistro Chat Noir.   It's my favorite restaurant in New York City.   I had the
Lemon Sole “Duglere”.     So good.

On Sunday, Kari, Sally and I went to City Opera's Leonard Bernstein Revue:  Lucky To Be Me .    The first half was Bernstein's classical and the second was Bernstein's Broadway.   As he said, "There's no high or low music, just good and bad."   This was all good.

The classical  - Kaddish Symphony, Mass, Songfest - was gorgeous, sweeping and poetic.  The Broadway stuff  - selections from his shows, all of which I've seen except 1600 Pennsylvania Avenue - On the Town, West Side Story, Wonderful Town, and Candide- was fun  and finally soaring.   Any concert ending with Make Our Garden Grow  is a winner.   The performers  - Michael Cerveris, Victoria Clark, Darius de Haas, Christine Ebersole, Christopher Feigum, Joshua Hopkins, Sara Jakubiak, Cheyenne Jackson, Joshua Jeremiah, Donna Murphy, Kelli O'Hara, Sidney Outlaw, Patricia Risley, Talise Trevigne, and Michael Urie - were all excellent - even though at times difficult to hear in the fourth ring - c'est la vie for a cheap ticket.     It was the sort of performance that I would gladly see over and over.
at 12:33 PM

What a fantastic weekend. Scottsboro was an experience like none other. I would like to see it again, esp. for its incredible staging - the cast album is really wonderful.

The Bernstein concert was truly divine, save for the sound issues we had Saturday. I talked to some folks in the orchestra section who couldn't hear some of the words. But I loved watching those Broadway kids knocked out showstopper after showstopper!!