I'm not the jealous type.  Really, I'm not.  I'm thrilled for you if you get to do something exicting.  Yes, I am.  But, damn it, I admit that I am incredibly envious of this one.   My friend Simon Cram, an opera singer himself, traveled to Italy to see Mariella Devia in Maria Stuarda in Modena.   But I'm the one who introduced him to her voice!   At the very least, he could have stowed me in his suitcase.   Off with his head, I say.

Simon says: "I was absolutely transported. It was spectacular. The whole cast was amazing, but when Devia came out, there was a pause, then a hush, then thunderous applause and bravis for several minutes. My heart was racing so fast. Then she started to sing and, Sarah, I've never heard anything like it. She is pure magic, grace and artistry."

I was first introduced to Mariella Devia when my friend Sally and I saw the film of Maria Stuarda (available on DVD!) at Symphony Space, presented by Opera in Cinema.  It was filmed live at La Scala.   Even at a screening of the film, it felt so vibrant and present  and I have never felt so thrilled by a performance.   It seemed as though most of the audience felt the same way - loud applause and bravas and Mariella wasn't even there to hear it!     I have heard from my friend Opera Chic, who has had the pleasure of witnessing Mariella perform live, that Mariella doesn't leave Italy any longer after the death of her husband who was her manager.

I really must start planning my own trip to Italy. 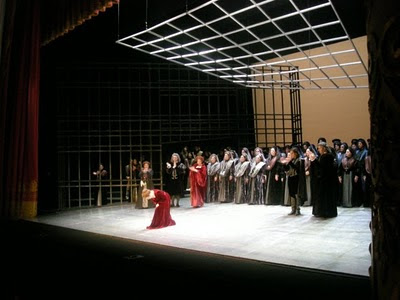 Gah! Emerald with envy here. But what an awesome experience for him. Enjoy our legends while they're still around.

I couldn't find this video so I thought it was removed from youtube. Thanks for bringing my attention back to it. I'm flippin obsessed w/ this ten minute snippet. Have you REALLY watched this video? She doesn't struggle, strain or anything. She makes it look like it's a walk in the park. Since I got my hands on the recording of this, I listen to it just about every day. It's that good. And I know you know that it's that good. But I'm just saying. Devia is flippin AMAZING!

I, too, am jealous of your friend. Devia would be something else to experience live.