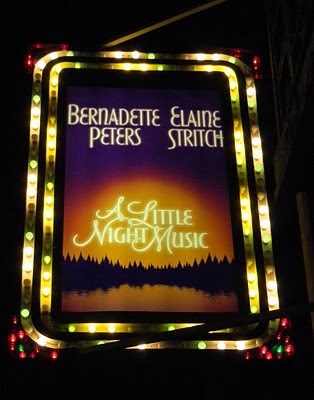 I saw A Little Night Music from a front row seat last night as part of a mutual treat from my college student cat sitter Kyle - he provided the student id for rush, I provided the cash - $54 for two seats.   What a steal.

It was special to be there with Kyle - he's a musical theatre major and since he's new to New York City, he has seen few shows and is uber excited about everything.   He was especially excited to see A Little Night Music - his first Sondheim show, his first Bernadette Peters, his first Elaine Stritch, and his first front row seat.   Seeing a show with a neophyte is always an interesting experience and this was no exception - my jaded eyes are freshly opened.

It was thrilling to be so close to the actors.  Already heart wrenching moments that I had experienced from further back in the house became even more realistic  -  the angst of Hunter Ryan Herlicka's Henrick as he agonizes over always being ignored, and the pain and anger of Erin Davie's Charlotte and Ramona Mallory's Anne as they voice the state of being married.   Seeing tears flow down Ramona's face was stunning.   Erin continues to nail the wit and Ramona has grown beautifully in the role.

There have been some changes in cast since I last saw it - Bradley Dean is now the Count and Stephen Buntrock is Fredrick.   Bradley's count is perfect  - he's large, menancing, handsome and plays him as the dolt he is.   Stephen is getting there - he hasn't found all of the humor and irony of his predecessor Alexander Hanson, but he's handsome and capable.  It fun to see him lovingly lift Bernadette into his arms at the end and twirl around with her.

Katherine McNamara was on as Fredricka.  She plays her sweetly and the looks on her face are adoring of her fellow cast members.

Elaine Stritch as Madame Leonora Armfeldt didn't nail "Liaisons" - it seemed to go on for ages and the ad libbing was uncomfortable. Yet, she triumphed like the old pro she is, and particularly with the "wooden ring speech" which was intensely regretful and yet enlightening. The way she plays Madame Armfeldt made me think that when she dies, it is because she is finally satisfied that her daughter has maybe found her way with love and her own family and now she can move on. It was heady to experience.   Wouldn't it be fun for Sondheim to write a pre-quel about Leonora and that Croation Count?  Perhaps he is Desiree's father.

I was in awe seeing Bernadette Peters' Desiree as she wisely and skillfully "listened" to her former lover Fredrick described the ridiculousness of his young wife to her.  Every tiny look and gesture was worth a million words.  Later, her "Send in the Clowns" went beyond all expectations  - every nuance Bernadette offers finally makes clear what this story is about and the loss that Desiree is feeling is poured out for all to see, but in a beautifully subtle and quiet way.

We went to the stage door after, a rarity for me these days.  Kyle was thrilled to meet members of the cast, specifically Ms. Peters.  I always love visiting with her  - she is always so lovely and sweet to everybody.   I was thrilled to see Hunter as well, especially on the eve of his next solo cabaret at Feinstein's this Monday.  He's a fantastic performer on Broadway, but he really pulls out all the stops at his own show.

This was my seventh and probably final time seeing this production.  It closes on January 9th.  Unless I sit on stage, I couldn't get closer again.  I still maintain that I don't love this production - the distressed look of the set, the drab colors, the lack of lighting, the minimalist band accompaniament still turn me off; yet, I still love the story by Hugh Wheeler and of course, the music of Stephen Sondheim stirs my soul.   It's musical theatre at its best. 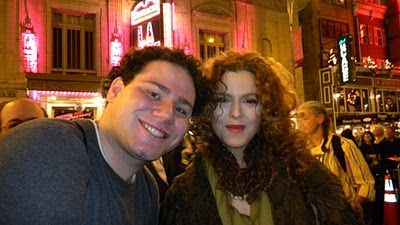 Your interpretation of Leonora's death is pretty much how I feel about it. She can finally move on with the satisfaction of knowing that both of her girls are going to be just fine - and they'll live their 'coherent existence' on the estate and wealth Madame A will no doubt bequeath to them. It's beautiful symmetry.

I love that you're not only indulging in your own ALNM obsession, but shepherding others into the fold as well. Very Auntie Mame, my love. And the fact that you're riding on his student-rush coattails in no way diminishes your spiritual right to a berth on Beekman Place.

What he said and he said. Brava, my dear. Brava.