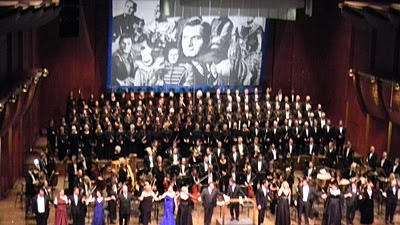 Last night the 35th annual Tucker ﻿Gala concert came and went far too quickly.   It's an annual concert to raise money for the Richard Tucker Music Foundation.  The Foundation, named after the great American tenor, was founded as a "non-profit cultural organization dedicated to perpetuating the artistic legacy of the great American tenor through the support and advancement of the careers of talented American opera singers by bringing opera into the community."  Each year the Richard Tucker Music Foundation awards cash prizes to individual U.S. born singers. There is no application process, only nomination. This year's winner is tenor James Valenti.
Each year, as soon as the date is announced, I mark my calendar and when invitation arrives, I run to the post office to mail my check for tickets.   It is,  hands down, my favorite concert event each year.   This year international opera stars Pavol Breslik, Ferruccio Furlanetto, Elina Garanca, Marcello Giordani, Brandon Jovanovich, Simon Keenlyside, Angela Meade, Anna Netrebko, Lisette Oropesa, Deborah Voight , Christophoros Stromboglis, Paul Appleby, Jennifer Johnson, Tom Fox and Wendy White joined James Valenti, the Metropolitan Opera Orchestra and New York Choral Society under the baton of Maestro Marco Armiliato.    My favorite mezzo-soprano Susan Graham made a surprise performance!
This concert is a time for the singers to show off and have fun.  I think the singers are having just as much fun as the audience is in Avery Fisher Hall.   It's an opportunity to hear the "greatest hits," as Sally says.  Singers are paired for duets, who probably wouldn't appear together in an opera.  As well, arias are performed from operas that might not make it to the stage in New York.   This year's program was no exception.  Highlights for me were Elina Garanca's "Carcelaras" from Las hijas del Zebedeo, Simon Keenlyside's "Vision fugitive" from Herodiade, Angela Meade's "Era desso il figlio mio" from Lucrezia Borgia, Anna Netrebko's "Heia in den Bergen" from Die Csardasfurstin (complete with such exuberant choreography that her up-do tumbled!), Deborah Voigt's "Sola, perduta, abbadndonata" from Manon Lescaut, and Susan Graham's "Ombra mai fu" from Serse.   The thrilling last number of the evening was Finale of Act III of La gioconda featuring Deborah Voigt, Wendy White, Marcello Giordani, Christophoros Stromboglis, Tom Fox and the Choral Society.
As usual, all of the women looked gorgeous in their gowns (and Susan looking sensational in a very chic pantsuit), opera hunks were abundant and Maestro Marco is still the cutest conductor around.   I think Angela Meade received the loudest, most enthusiastic response and frankly, an encore would have been welcome.    Sally managed to stay away from any skirmishes with grumpy old ladies this year, but I fell into a fit of giggles when the gentleman behind me snorted in laughter right as Deborah was about to sing her very serious aria - let's just say I was in a precarious state and the fact that next to me Kari was having a hard time keeping it together as well didn't help matters.
Unfortunately, this year's concert was not filmed for broadcast as it has been in previous years.   I will have to settle for biding my time for another 12 months for this fabulous annual event to come around again. 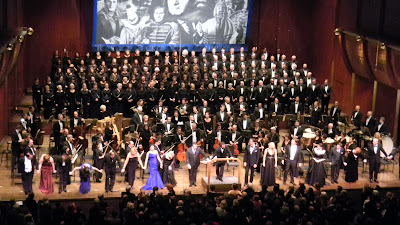 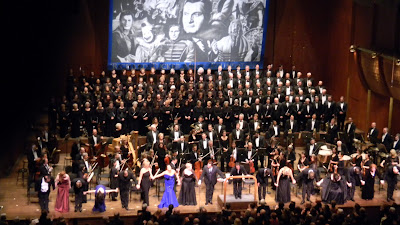 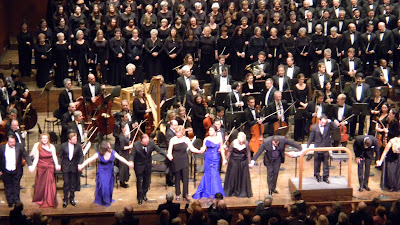 Lovely! It was indeed a magical evening - I'm glad I could finally make it.

I must say, Sarah, your favorite tenor Marcello Giordani was in excellent voice last night.

Karigee - yes, you're right it was the aria from Serse(Xerxes).