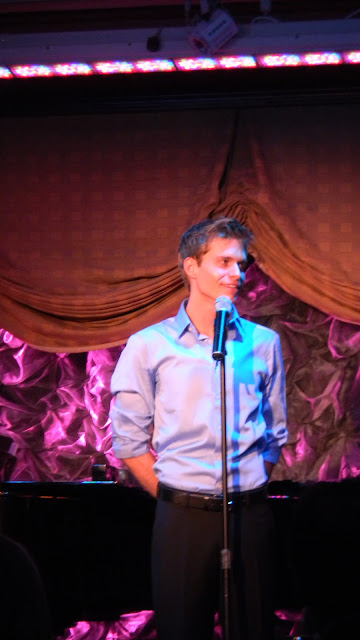 Hunter Ryan Herdlicka had me at hello when we met at Bernadette Peters' party after her Broadway concert little over a year ago.  It was just on the cusp of Hunter's Broadway debut as Henrick in A Little Night Music.  What I loved most about him was his commitment to the history of Broadway and respect for those who have come before him.  He wore his enthusiasm and excitement on his sleeve, leaving little doubt in my mind that he would become a star.

I've seen Hunter perform as Henrick seven times in A Little Night Music and each time has been more thrilling than the last.   Always playing with passion, he has grown in subtlety and nuance.   It's been exciting to see him in the role.

And then there's his solo cabaret show.   On Monday night, Hunter had his second outing at Feinstein's.  He was invited back after a wonderful debut in the summertime.    He kept the show sentimental and tender set running with just the right amount of droll humor.    Not one to be shy, he seems to have no problem sharing some ridiculous and very funny stories about his early childhood.  He, as a seven year old, was already a self-proclaimed "musical theatre addict."

Like his first show, Hunter opened with "I Happen to Like New York," mixed with "Another Hundred People" once again.  It's a great opening number and I know that when Hunter sings those lyrics, he really means it.

In the audience were Hunter's castmates from A Little Night Music - Ramona Mallory, Bernadette Peters and the two alternating Fredrikas, Keaton Whittaker and Katherine McNamara.    I was impressed to hear him sing, seemingly with no qualms, “No One Is Alone” from Into The Woods, a show Bernadette starred in and a number often sings in concert.

Keeping with covering Sondheim tunes, he also sang "Johanna," from Sweeney Todd, a number he professed to always have wanted to sing.  He told us about talking to Bernadette about this and she told him that since it's his concert, he should sing whatever he wants to sing, adding "After all I sang 'Later' in concert and I'll never get to play Henrick."   I was very excited to hear his rendition of "Johanna," as I'm often thinking of another revival of one of my favorite shows.  He would absolutely make a fantastic Anthony or even Tobias.

He also sang Sondheim's "The Glamorous Life,” from the 1977 film of A Little Night Music.  He said, "It's performed byt he 13 year old girl Fredrika, but I thought why not."  His two Fredrikas were sitting in the front row, I imagine, beaming at him through his beautiful rendition.

He kept his "Peter Pan" medly from his first show, something which I was very glad about.   His performance of these pieces is poignant, due to his confession that it was the first show he was passionate, read obsessed, about.   He practically wore out the vhs tape of Mary Martin's tv production of Peter Pan and used "I Won't Grow Up" as an audition piece as a child.
His grandparents and mother were also sitting in the front for this show, ignoring his mandate that they sit in the back.  It's obvious that they are proud and supportive of him and he couldn't hide the fact that he's a bit homesick for Dallas and his mom.   He proceeded to sing a quite emotional rendition of “How Are Things in Glocca Morra?” from Fininian's Rainbow.

He closed with Jerry Herman's "Penny in My Pocket," a song I love and find personally appropriate for this venue since the version I have is sung by none other than Michael Feinstein, the very proprietor of this night club.    It's a rousing number and I think telling of Hunter's success that has come with a lot of talent, a lot of hard work and possibly just a little luck.

Much to my surprise and delight, he encored with "The Age of Not Believing" from his former co-star Angela Lansbury's Bedknobs and Broomsticks.   It basically said it all.

Under the stage direction of  Diana Basmajian and the music direction/piano accompaniment of the immensely talented Mary Mitchell Campbell, this show at Feinstein's is a mixture of light comedy and sweet emotion.  It runs almost too fast and ends way too quickly.  I was thrilled to be a guest of his publicist Judy Katz.    Fortunately, I also remembered to bring tissues this time.
A Little Night Music closes on January 9th, freeing Hunter's schedule for something new and exicting.  I can't wait to see what comes next for him.