I attended my first recital by a male artist last night at Carnegie Hall.    The only difference with a male performer - and drawback - is that there are no fabulous gowns and no change at intermission.  Oh well, Bryn Terfel was pretty fabulous as was and there was nothing to distract my crow eyes.   Bryn is a bass baritone from Wales and I've seen him a number of times at the Metropolitan Opera (I LOVED his Falstaff in 2003) and have several of his recordings, it probably goes without saying that my favorite is Under the Stars with Renee Fleming 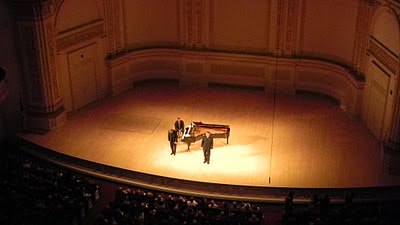 Bryn's baritone is warm, rich and magnificent.   It's so interesting to hear the capability of range in a voice of his size - earlier this year I heard him in Wagner's Das Rheingold which vocally is all about enormity and power - but in last night's lieder, it was intimate and nuanced.
The first half of the announced program was dedicated to Schumann lieder  - Belsatzar," Op. 57, Liederkreis, Op. 39, "Die beiden Grenadiere," Op. 49, No. 1 and "Mein Wagen rollet langsam," Op. 142, No. 4 .   From the Liederkreis, I adored the Mondnacht.   The other song cycles were Finzi   - "Let Us Garlands Bring, Op. 18," from on Shakespeare texts - and Ibert's "Chansons de Don Quichotte."
Schumann was in German, Finzi was English and Ibert was French.  I preferred Bryn's voice on the German and English, over the French.  I particularly enjoyed "It Was a Lover" from the Finzi cycle.
As usual, we sat in the balcony where the unamplified sound floats perfectly up to the ceiling.   For Bryn, his large voice was beautiful, but hearing his pianissimo float up was divine.
Malcolm Martineau accompanied Bryn at the piano.   We had heard him play for Susan Graham before at a Carngie recital (she was there last night as well, so she tweeted .  He's a brilliant accompanist and seems to have a lot of fun from his spot on the bench.   He even joined in on one of Bryn's encore pieces.    I really loved his playing on Schumann's My Car Rolls Slowly from the "Die beiden Grenadier" lieder.
Bryn dedicated his encore section to his hero John Charles Thomas, an American singer of Welsh descent.  John Charles sang on Broadway and in opera houses around the world.   Bryn presented sort of a bio about him, infused with songs that he had performed, even including Home on the Range which the Carnegie audience joined in on.    Apparently, John Charles had quite a hit with that piece and when he performed at the Lyric Opera in Chicago, the audience chanted to hear it when the opera was over, much to the chagrin of the critics.
He included a wonderful rendition of Mack the Knife, sung in the original German from Die Dreigroschenoper (The Threepenny Opera).   Bryn also encored with a rousing Mefistofele, after noting how much audiences love its bad boys.  He accompanied it with an incredible, hysterical two fingers in the mouth whistle, sustained and on pitch.
His final encore was a song I had heard in church many times, but never quite this beautiful or emotional  - “The Lord’s Prayer”  that had been arranged for John Charles by Albert Hay.
I had hoped that he would give us some Sweeney Todd, which he has performed a number of times, at least My Friends or especially Epiphany (or oh my God, since Suzi was there might she have joined him on A Little Priest).  I was chanting Sweeney very quietly, when I heard the gentleman several rows behind me also chanting Sweeney.   I guess we should have joined forces.   Next time, Bryn, next time. 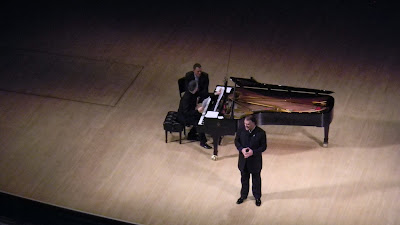 I was at Bryn Terfel's recital last night too, and, like you, I had a wonderful time. -I also realized that last night was the third or fourth time I've caught Mr. Terfel in recital at Carnegie Hall.

I noticed that you stated: "I really loved his playing on Schumann's My Car Rolls Slowly from the "Die beiden Grenadier" lieder." Actually, "Mein Wagen rollet langsam" and "Die beiden Grenadier" are two separate songs. However, "Mein Wagen" was originally part of the Schumann's "Dichterliebe" song cycle, but he cut it from there for "balance" considerations, then included it later as the fourth song of his Four Songs, Op. 142.

The John Charles Thomas section was actually part of the recital program proper. It even stated in the program that the selections would be announced from the stage. One interesting thing I noticed is that CH actually left out the last name of Albert Hay - which is Malotte - in the program notes. -And, yes, that was truly the most beautiful rendition of that song I've ever heard.

I would have also liked to hear some "Sweeney", and when he was setting up the aria from "Mefistofele", I almost thought he was going to sing "Epiphany" - especially after he said you would want to keep this guy "at arm's length". Ah, well. -Although, I also would not have minded him finishing off with "Deh vieni alla finestra" from "Don Giovanni" again. He usually ends up walking off the stage serenading various women seated in the audience with a rose in a hand.

Thanks for all of the clarification, Jose! I really, really enjoyed his recital and I will definitely catch him again. Yes, that "at arm's length" had me on the edge of my seat, thinking, this is it! Oh well, he's a tease, not that I didn't enjoy the Mefistofele as that was big fun and fabulously performed.

Sarah, how could you forget Matthias Goerne's recital a few years ago? I have to admit MG is my favorite lieder singer. Gorgeous voice.

Wow Sally - yeah I did forget. I need a personal assistant for my memory. Or maybe I should re-read my own adventures.