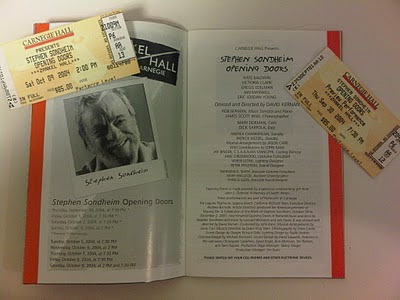 It was was just a little over six years ago that I began my commitment to all Sondheim music.

In October, 2004, I saw a revue of Stephen Sondheim's music called Opening Doors at Zankel Hall, the smaller hall behind Carnegie.   It was a brief run, but I managed to see it twice from the front row, mostly thanks to being so enthralled with Kate Baldwin's performance.   It was the first time I had ever heard her sing and obviously, she has become one of my favorite performers.

It was a particularly fun, if weird, show.  Best of all it was the perfect introduction into the world of Sondheim shows and the man behind the music.

Tonight, I'm going to Carnegie Hall for yet another Sondheim 80th birthday concert.   The draw this time is one Kate Baldwin.   She, along with Aaron Lazar, Alexander Gemignani, Marilyn Maye, and Christiane Noll, is performing with the New York Pops.

Kate is making her Carnegie Hall (Stern Auditorium) debut tonight.   I'm thrilled to be there to witness yet another step in what's becoming a marvelous career.   But mostly, I'm thrilled to be going just because I can't imagine missing her singing Sondheim numbers.
at 4:05 PM