Fan Day at Chicago the Musical

I saw Chicago at the Shubert Theatre the weekend I moved to New York City in June, 2002.  I was with my college roommate Robin, who drove with me from San Antonio to Manhattan.  She wanted to see A Little Shop of Horrors, but I turned up my nose at that (wrongfully, because I later saw it and had a great time).   She liked George Hamilton and he was in as "Billy Flynn" so we settled on that and bought our tickets from TKTS.    I always meant to go back to see it.

I finally got the chance yesterday when Chicago showed its appreciation for its fans by hosting an all comped show - all of the tickets were distributed via their Facebook fan page.  I missed the opportunity to nab one of the comp tickets, which were given out using the "like" button.  However, my friend SteveonBroadway earned one of the tickets...although unfortunately for him he was unable to use it and handed it off to very lucky me.

The current revival of Chicago turns 15 in March.  It's no wonder that it's still going strong. The cast is amazing and the energy is infectious.  I was reminded of how much I enjoy this show and how much I love the Kander and Ebb score.   The current leads are  Leigh Zimmerman as "Velma Kelly," Biana Marroquin as "Roxie Hart," Robert Creighton as "Amos Hart," LaVon Fisher-Wilson as "Matron 'Mama' Morton," and Colman Domingo as "Billy Flynn."   It was all brilliantly danced and performed.  I especially enjoyed the very spunky Bianca Marroquin, who comes with a big voice in a tiny package (I saw her as Daniela in In the Heights - I remember thinking at the time that she was fabulous but I had to look twice to believe she wasn't Andrea Burns).

The energy in the house was high - there were a lot of "super fans" in the house.  The orchestra section was packed with super fans, invited guests and press.  The mezzanine was less packed, but just as excited.    I saw alumnus Karen Ziemba and Ute Lemper, and heard that Chita Rivera ("Velma" in the original production) and Lillias White were in the house.

Seth Rudetsky and Julie James of the Broadway channel on XM/Sirius Radio hosted a pre-show drawing and trivia game for prizes.  We were all given t-shirts and bowler hats and were asked to stay at the end for a "family" picture by producer Barry Weissler.  It was a very fun afternoon and I know that I won't be able to stay away from Chicago for another 8 and 1/2 years. 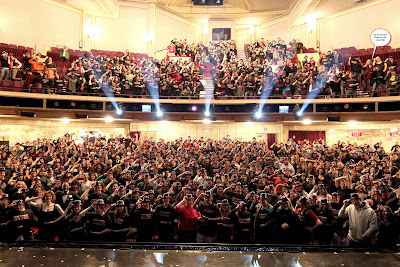