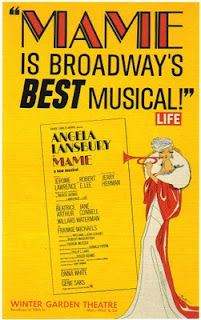 Forty-five years ago today, Jerry Herman's MAME opened on Broadway at the Winter Garden Theatre.  It starred Angela Lansbury as Auntie Mame, Bea Arthur as Vera Charles and Jane Connell as Agnes Gooch.   It moved to the Broadway Theatre on October 6, 1969.   It ran a total of 1,508 performances.  Angela took Mame on the road.  Her Broadway replacements included  Ann Miller, Jane Morgan, Janis Paige, and Sheila Smith.  It ran successfully in the West End of London with Ginger Rogers as Mame.

Mame is the musical version of Auntie Mame, based on the novels by Patrick Dennis and the play by Jerome Lawrence and Robert E. Lee.   The story is about a glamorous, live-loving, madcap single aunt who inherits her young orphaned nephew Patrick.  It's a joyous and life-affirming story, and I myself try my best to emulate Mame's philosophy:  "Life is a banquet and most poor sons-of-bitches are starving to death."

MAME has only been revived on Broadway once:  in 1983, by Angela Lansbury herself.   While Angela's performance was critically acclaimed, the production was not and ran only for one summer season.    In May, 2006, a limited run of MAME was produced at the Kennedy Center starring Christine Baranski and Harriett Harris.  It was fabulous, but not quite enough so to get it moved to New York.   Last year, Jerry Herman himself stirred up talk that a revival might be in the works in an interview with Broadway World.   Since the brilliant revival of Jerry Herman's LA CAGE AUX FOLLES only recently closed and there is still word on the street that a revival of his HELLO DOLLY! is in the works, one can continue hoping that a full-fledged Jerry Herman Renaissance is in the cards and we will sooner than later get a revival of MAME on Broadway.   Donna Murphy for MAME, anyone?