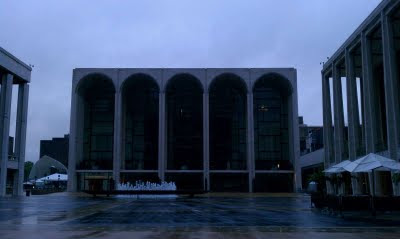 After months of preparation, I proclaim the 2011/2012 Ticket Scramble a success.  I, with a little help from my friends, pour over the websites and season brochures of the Metropolitan Opera, City Opera, Carnegie Hall, Opera Orchestra of New York, the New York Philharmonic, Lincoln Center, Collegiate Chorale, The Tucker Foundation, Opera LaFayette, opera companies in other cities, Feinstein's and City Center. I came up with a list of 52 possible entertainment opportunities, not including events that pop up serendipidously (and inevitably going more than once).

Yesterday, we attended the first day of single sales for Met Guild Members at the Metropolitan Opera (general sales for single tickets begin next Sunday).  Kari and I arrived at 7:00 a.m.; the first hopeful ticket buyer in line arrived at 4:30 a.m.  Roxie and Sally joined us shortly after 8:00 a.m.   One reason we like to buy early is to have first crack at the productions that might potentially sell out, especially in the Family Circle where tickets are only $27.50 on a week night.   We are among the youngest in the line, and probably Roxie was the youngest yesterday.

After celebrating and settling up over Bloody Mary's and brunch at Cognac, Sally and I headed back up to Lincoln Center and purchased tickets for Britten's War Requiem performed by the London Symphony Orchestra and Sabina Cvilak, Ian Bostridge and Simon Keenlyside, and two soprano recitals at Alice Tulley Hall - Anna Caterina Antonacci and Christine Brewer, respectively.

Still to purchase will be the Met's Live in HD broadcasts tickets, Carnegie Hall and a variety of miscellaneous performances, of course, not including Broadway and off-Broadway entertainment that will inevitably come my way.  We do pretty well on our choices and spend as little as possible in order to see as much as possible.  For this pursuer of endless entertainment, fall through spring is definitely the best time to be in New York City.
﻿