A season of Handel! 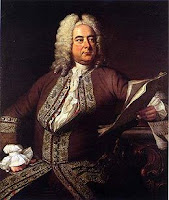 I realized last night, as I was re-stocking and organizing my Ticket Vault, that I will be seeing three separate George Frideric Handel operas this season!    I am extremely excited about this.  His music is so lush and romantic and is one of my favorite composers.  It uplifts my spirit and floats me in suspension of beauty and calm.

The first opera will be Xerxes (Serse) at the San Francisco Opera in November.  I'm especially excited for this one for several reasons:  1) I'm visiting another American Opera house; 2) I will get to hear my favorite mezzo-soprano Susan Graham sing "Ombra mai fù" live again and in context; and, 3) best of all, my mother and sister will be with me.  Countertenor David Daniels co-stars.

The second opera will be at the Metropolitan Opera - Renée Fleming in Rodelinda.   I think this will be my fourth time seeing this opera.  The first time was in 2004 at the Met and it was the first time I saw Renée in an opera.  I was over the moon with excitement in seeing her at the Met for the first time.  My friend Paul and subscription partner at the time, called is "Bordelinda" and stormed out, but for me it was a thrilling experience.  It was basically the whole reason I wanted to buy a subscription (not knowing then what I know now).  It is easily one of the Met's most beautiful productions, both in set and costumes.   Fortunately, Stephanie Blithe will be joining Renée once again - she all but steals the show!   I absoluately LOVE Renée's "Mio Caro Bene", which is nothing short of joyous.

The third will be The Enchanted Island in January, again at the Met.  It's an opportunity to hear David Daniels again, this time with the effervescent mezzo-soprano Joyce DiDonato.   While it's not strictly Handel, since it includes music of other 18th century composers, it looks divine and my excitement builds knowing that it brings together the the lovers from Shakespeare's A Midsummer Night’s Dream who are shipwrecked on his other-worldly island of The Tempest (my most beloved Shakespeare).   The costumes look absolutely delicous.  ﻿
﻿
at 9:31 AM

When you seeing Xerxes? My tix are for Nov. 11: you gave me such good advice when I was visiting NYC with my daughter last fall that I'd love to be able to return the favor in some manner or another on what amounts to my home turf!

Hi Sybyl - We'll be there for the final performance. I looked a little bit at what else might be showing, but nothing jumped out at me. I would love see any advice you have.

I actually live 90 minutes down the coast from SF, so I'm less informed on the local theater scene than I would like to be. Cutting Ball Theater (cuttingball.com) is doing the play Pelleas and Melisande while you're here, and that should be interesting. They are an experimental theater group, and well-loved by some SF bloggers whose opinions I trust. What I can really recommend are a few restaurants in the area and, if you have time, a side trip or two that will give you a chance to take in some of the most breath-taking scenery in California (and we have us a lot of that) and land you at some good places to eat. Will you have a car at your disposal?