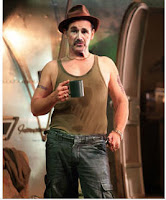 After talking about it all season, I finally got around to seeing Jez Butterworth's  Jerusalem  at the Music Box on Broadway last week.  My motivation to see it was mainly for two reasons: Mark Rylance and because it's an English story.   It closes on Broadway on August 21st, after several extensions.

But this play is not just an English story.  While it's set on St. George's Day, a celebration dating back to medieval times, and refers to some British history and culture, it's a story of degradation of society that could easily be American.

Mark Rylance plays Romany Gypsy "Johnny Rooster Byron" who has been a hero to the local misfit teenagers, even though he is way past his prime due to years of living in squalor and drug and alcohol use.  At first glance and thru most of the first act, he is charming and funny.  He's a cross between the Pied Piper and Peter Pan.  It's easy to see why the teens love him, aside from the fact that he keeps them high.  He regales them of stories that are larger than life.  By intermission, he's become despicable.  By the final curtain, he's become pitiful.    No one seems to be able to resist him, although in the end it's clear that what they can't resist is his wares.

It seems a comedy, but its depth soon reveals itself, especially in its look at society and references to the William Blake poem "And did those feet in ancient time."  On the comedy side, the cast of misfits - a dotty old man, the local pub older who is Johnny's childhood mate, a young near do well named Ginger who thinks he is not just a client but a real friend of Johnny's and a passel of outcast delinquents.  It is difficult not to find all of these funny and lovable, even while disapproving of their life that is quickly going nowhere.

Buried in all of this wildness and ridiculousness is a man who has a tender heart - Johnny is hiding a teen-aged girl named Phaedra from her lecherous stepfather.   She flutters in and out, seemingly ethereal and fragile.  At first she is believed to be a runaway until it is clear where she has been all along.  In the end, as Johnny is facing the end of his existence as he knows it as the town and law have finally had enough of his drunken shenanigans, trespassing, tax evasion and drug dealing, he is done in by his attempt at chivalry for the girl.   It's at once shocking and heartbreaking.

I have seen Mark Rylance in three very different plays on Broadway now - Boeing Boeing, La Bete and Jerusalem.    He is a miracle of the theatre.  He has the audience in the palm of his hand every moment he is on stage.  Every time I've been in a theatre with him, it has been filled with laughter and awe.  His sheer physicality and vocal ability and the lengths at which he will go for the character is something far beyond what we normally see.  With Jerusalem, it was not only laughter but horror at the place he took us, where probably none of us wanted to go - down that road of pity and empathy for one so despicable.

The production itself, directed by Ian Rickson, is fast paced and rich.  The set and lighting, by Ultz, are terrific - the British version of an Airstream trailer, looking much dilapidated, amongst a beautiful lush wood with a lawn on which a sundry of broken down furniture and accoutrement are strewn about.    There is even a chicken coop under the trailer - and those chickens did not go unnoticed as they had to have their say in the second act with much loud squawking and clucking.

I can't say I loved this play, but I was amazed by the production and was especially thrilled by the acting.

Mark Rylance has been playing this role for about two years now and will continue to play it in the future, as the production is moving back to London from whence it came.  It first opened in 2009 and transferred to West End in 2010.  He won the Olivier for this role in London in 2010 and in 2011, won the Tony for Best Actor.   It is scheduled to re-open at the Apollo in the West End in October.    Further, Mark Rylance has no understudy on Broadway which is just yet another witness to the miracle of an actor that he is.