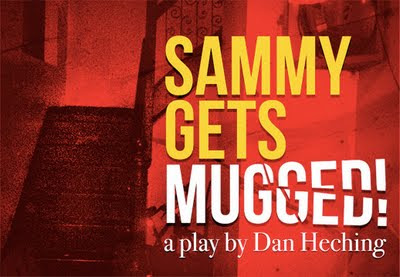 We are mere days away from the start of the 15th annual New York International Fringe Festival (FringeNYC).  One of the best selling plays of the festival is SAMMY GETS MUGGED!, a play by Dan Heching.   Sammy Gets Mugged! is directed by Noah Himmelstein and stars Dan Heching as Sammy, Stephanie Pope Caffey as Rue Felicite, Patrick Byas as the Mugger and the voice of Hanley Smith as the ATM.

I had the opportunity to ask Dan Heching, the author and star, a few questions about himself and the piece:

Tell me a little bit about your play. Is it autobiographical?

SAMMY GETS MUGGED! definitely has strong autobiographical elements. It is loosely based on something that happened to me while I was living in Paris 6 years ago, but the way I remember it, and how my perspective has changed, are incorporated into the piece as well. Even the process of writing about it is an element within the play!

You’re a writer by trade, yes? Is this is your first play or the first time you’re being produced?

This is my second play -- I've workshopped both SAMMY and a previous piece in various places both in Paris and New York. But this opportunity with FringeNYC is definitely the first time I'm seeing my work produced, yes! On the side I work as a freelance reviewer, journalist and copywriter. I've even translated some French comic books into English.

What made you want to share this story as a play?

As I constantly recounted the incident to friends and family, including specific thoughts that went through my head at different points throughout the exchange, it grew into a performance of sorts in its own right. Transforming it into a play only seemed natural, as it is the best way to explore this curious moment, its effects and the impressions it leaves on those involved (both imagined and real).

Was writing the play cathartic?

Honestly, writing the play was LONG. I started writing about the mugging in 2007, went through millions of versions (including a short film script), and held a few readings during the process. Writing this last draft, while getting ready for the Fringe, was definitely cathartic.

First exposure to the fringe?

Talk about your first time as an actor?

I was a child actor. My grandfather had to take me on auditions on Lafayette Street because I didn't know my way around south of Union Square (even as a high school freshman). I had an agent around the time of my bar mitzvah, did a few things here and there, but then walked away from it to concentrate on school (that was dumb!). But I never forgot how much I loved this process.

Does acting in this piece feel organic since it’s your own play?

In a way, it does. The language is of course natural-feeling, but Sammy is by no means me - he is a gross extension or extrapolation of me from a certain point in time. My director (Noah Himmelstein) has helped pinpoint how to differentiate between them - and it's been a challenge. The easy way out would have been to simply perform this as 'Dan'. But we're not going in that direction.

I understand you did a Kickstarter to fund some of the production. Do you feel like getting your story out there is a community effort?

What's great about Kickstarter is that it focuses on one sole thing when selecting which projects to approve for backing: creativity. I was thrilled to be approved, and when backers started coming in, I can't tell you how touching it was.

Would you say you’re more excited or nervous?

Were you able to have the mugger prosecuted and were you physically okay?

You'll have to come watch to find out ;)

Have you been back to Paris since the incident and specifically that neighborhood since this happened?

Absolutely. That's actually a huge element within the play. I went back a year or two later, while I was writing, and the story grew from there...
at 12:43 PM