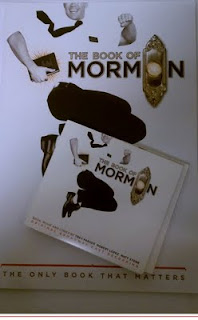 Hey Book of Mormon Fans!  Boneau/Bryan-Brown, press agents for The Book of Mormon sent me the original cast album and souvenir program!   But since I haven't seen the show and unless there's an act of God, or Joseph Smith perhaps, I probably won't see it since tickets are sold out for months in advance...I'm giving you the chance to win these for your own theatre memorabilia collection.

Personally, I know only a tiny bit about Mormons.  When my dad was transferred to Camp Pendleton in 1974, base housing wasn't available immediately so we were guests of his colleague's family in Vista, CA.  That family happened to be Mormon.  I was a little kid and really, the only thing I remember about the experience is that they had a cool fort in the backyard, the complete set of L. Frank Baum Oz books, and they didn't drink certain kinds of soda.   Their son eventually went to BYU and then off to some French-speaking African nation as a missionary for a year.

Answer these questions in the comment section and on Friday the 19th, I'll pick a random winner amongst the commentators:

1.  Have you seen Book of Mormon?   If so, did you buy a ticket, or win tickets via the ticket lottery?

3.  Have you ever been on a mission trip?

4.  Have you ever had an encounter with a Mormon missionary?

1. Yes. I saw it in April and bought my ticket.

4. No, I don't think I've ever met a Mormon missionary.

1. I have seen the show twice, once during previews and then again with my family after the opening (bought the family tickets beore the opening). My daughter has won the lottery once and also bought standing room. She's sort of obsessed with the show.

3. Nope. Closest thing would be the "Mission to Mars" ride at Epcot.

4. Only on line. Very friendly, but didn't want to talk about the show. Only interested in coverting me to Mormonism. The nerve!

1. I haven't seen the show yet. My infrequent trips to NYC have not aligned with any available tickets!

2. I have been to Utah once; skiing in Park City. Mountains are beautiful.

3. I have not been on a Mission, but my boss is Mormon and I have followed his two sons as they went on theirs.

4. I have had encounters when I lived in a traditional "house." Missionaries would come by every couple of years. Now, I live in a high-rise condo and have not had such an encounter in at least 20 years.

1. I have seen the show twice now (just got home from seeing it the second time actually, yaay!!), and both times, amazingly enough, were for free...I was one of the BoM Facebook fan contest winners who won tix to the invited final dress rehearsal, and then the tickets tonight I also won in a contest! :) Hoping I can get lucky here too... *fingers crossed* I'd really love that program, especially! I've seen it (the program, that is), it's pretty cool.

2. Never been to Utah...kinda curious about it, though.

3. Never been on a mission trip, either.

4. The only Mormon I've really encountered was my 5th grade best friend Candace, who was quite un-Mormonlike, really.

P.S. If you need my email addy, it's lady_stardust25@yahoo.com

1. as of a couple hours ago I have seen the show twice. both times I was the +1 of a most amazing friend who won the tix in various contests

2. I have been to Utah a few times servicing equipment at a movie theatre north of Sal Tlay Ka Siti. Prior to that I drove through the state when I moved to LA from St Louis. Also most recently I had a flight connect thru SLC on the day that NPR started streaming the cast recording.

4. I audited a college course called American Religion Center to the Fringe, and every week representatives of one of these faiths came to talk to the class. One week our guests were 2 pair of elders

1. I haven't seen the show. Really want to though!
2. I've never been to Utah. Would love to see Utah!
3. I haven't been on a missionary trip.
4. I've worked with Mormons --- but I've never met a Mormon who was on a mission trip.

Hey everybody! Thanks for entering. The name has been drawn and the winner is: held hostage in Atlanta! Send me an email at sbethroberts @ gmail to let me know your mailing adress and post the package to you!

Wow - Thanks Sarah B! I am sending the email now.