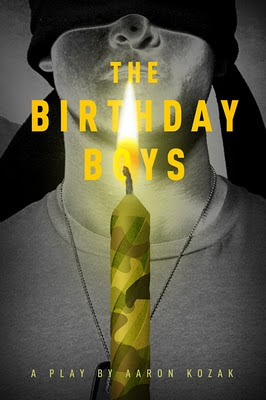 I was immediately intrigued to see Aaron Kozak's The Birthday Boys when I opened the press invitation.   I learned the subject was about three young Marines stationed at Al Asad Airbase in Iraq.  Being the daughter of a retired Marine, I maintain a keen interest in anything relating to the Corps.

My only expectation was to see a war drama.  What I got was an emotionally consuming 90 minutes that will stay with me for a long time.

The scene is set in Access Theatre's Black Box.  There is Iraqi music or prayers playing over a pa and the room is very dim, with the only light from two bare bulbs hanging down from the ceiling.  It seems to be a storage room of sorts.

The fear begins when a Marine,  struggling and screaming, is carried into the room.  Because of the dimness, it's difficult to know who his captors are.   His legs and arms are bound, his eyes blindfolded.   Left alone, he "scootches" and writhes around the floor to ascertain his surroundings.  He is Private First Class Lance Tyler, played by Walker Hare.

Soon, he is joined by a second Marine, in the same condition.   He is Private First Class Chester Gullette, played by Lowell Byers.  They become aware of each other through the shouting and it's clear that terror is just beginning.     Recognizing each other, they fall into an easier existence through the camaraderie of brothers in arms.  It's clear that one is older and one is quite immature.   There is anger and fear at their situation, but they also unwittingly comfort each other with trash talking and humor.

Eventually, a third Marine is forced in to the room similarly to the previous two.  He is Private First class Colin Carney, played by Zach McCoy.

As the three struggle physically and emotionally, they constantly gravitate to each other as if the closeness brings some unconscious comfort.   There is infighting, teasing, and trash-talking mixed with fear and even tenderness.  Some times their biggest fear is about peeing in their pants, which they turn into a bet on who can last the longest.   Even though their ranks are the same, the oldest one, Chester, is their de facto leader only because at 28 he is practically an old man compared to the other two, who are ages 22 and 23.

Colin and Lance share a birthday on this fateful day, which is what brought them together on a watch in the first place, hence the title.    Intermittently, their captors enter the room and separate them physically.  Eventually, their Iraqi captors begin to interrogate them and torture is at hand.   Three of the captors remain incognito, their Muslim scarves wrapped around their heads and faces.  The fourth captor speaks English clearly, although with an accent.

As the reality of their terror escalates, the young Marines are forced to reveal the secrets of their inner selves, which serves to bring out that uncommon courage that young service people share.  Doubts of each other's bravery is dispelled and they confess admiration for each other, even as they continue to fear their fate.

Suddenly, as if a light is switched, the drama makes an unbelievable turn.  I won't tell you more about this because it is one of the most astonishing turns I have ever witnessed in theatre.  I don't think any person could have seen it coming.   The way in which the three captured Marines handle the situation is pride inducing.

This play doesn't waste time on the politics of the U.S. being in Iraq.  It merely looks at the psychology of being a prisoner of war and how a captive Marine reacts to his situation.   Playwright Aaron Kozak was apparently inspired to explore this topic after visiting the Honoi Hilton in Viet Nam.  Without any heavy analysis, it's a thriller that infuses humor and horror in a glimpse from the inside.

The direction by Montserrat Mendez is even and compelling.   I felt as if I too was captive, always struggling to see and understand in the dimly lit room.   More than once, I felt as if it were all really happening.    The actors, especially Byers, Hare and McCoy, brilliantly bring the drama and humor to life.  They never miss a beat and even though their arms and legs are bound for the entire play, they move as if they are beautifully choreographed.  With their regulation Corps haircuts and their physical appearance, they are Marines for these 90 minutes.

The Birthday Boys premiered at the 2010 Hollywood Fringe Festival, winning the Best World Premiere Award and the LA Theatre Review Critics Choice Award.   This production by ArtEffects Theatre Company is the New York Premiere.   I think this production of this amazing play would make an excellent debut on Broadway, and dare I say it, eventually a cinematic release.   It is definitely one of the best I've seen, marrying drama and humor in the best possible way.

The Birthday Boys plays through September 25th.  Tickets are $18 and are on sale online via Brown Paper Tickets.
at 10:59 AM