Nabucco at the Met Opera 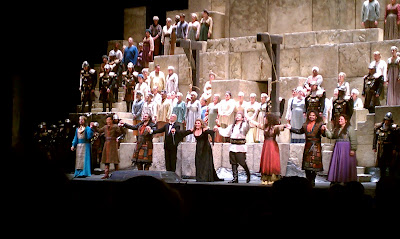 The 2011/12 season at the Metropolitan Opera began on September 26th with the new production of Anna Bolena.  Despite my anticipation of the new season, I didn't make it to the house for an opera until Tuesday night.  Thanks to Sally's willingness and availability to stand on line for 4 hours for $20 rush orchestra tickets provided by the generosity of the late, great Agnes Varis,  I finally started the season and it could not have been a better choice.
We saw Verdi's Nabucco, starring Zeljko Lucic, Maria Guleghina, Renee Tatum, Carlo Colmbara, David Crawford, Younghoon Lee, Hugo Vera and Amber Wagner.

We have been fans of Maria Guleghina and Zeljko Lucic since we saw them in Macbeth several seasons ago.   They are fierce, Verdian singers.  Their powerful voices soar above the orchestra and the chorus.   They have a bad ass presence on stage.

The opera is set in Israel and Babylon.   Nabucco, played by Lucic, is the King of Babylon and has attacked Israel.   Nabucco has two daughters, Abigaille played by Guleghina  and Fenena played by Tatum.  Abigaille is one of the leaders in Nabucco's army, while Fenena is sort of the more delicate daughter.   They are both in love with an Israelite, Ismaele, played by Lee.

In typical Verdian grand opera style:  star crossed lover problems, people trying to take the power (Nabucco declares that he is the one to be worshipped instead of the Israeli God and his own god Baal), a discovered true identity by Abigaille that she is really the daughter of slaves, madness and finally a poisoning.   The production, which first opened in 2001, also starring Guleghina, was excellent.  The set was amazing.   It was on a turntable which opened as a Hebrew temple that was actually set on fire - real flames on stage!   It rotated 180 degrees to the Babylonian's Temple of Baal.
The Met Chorus once again thrilled the audience.    After they sang "Va, pensiero,"  the audience applauded endlessly.     (See video below - there's no information on when this was filmed and I don't think it's it's the current Met chorus, but nevertheless you get the idea of what it felt like to be there surrounded by that glorious sound.)
At the end of the opening act, Maria Guleghina was all the way across the stage, on the other side of where we were sitting.  Her voice was so loud, it could be clearly heard over the other principals, the chorus (at least 75 strong), and the orchestra.  It was gorgeous and THRILLING!
In the final scene, there was a peasant who stood out on the edge of the stage directly in front of us.  Her voice could be clearly heard.  I was dying from the beauty of it and all I could think was that this woman needed to get out of the chorus!   Sally realized that she was in fact Amber Wagner.  I hadn't noticed her previously as part of the cast - she's playing the sister of one of the priests.  But in these final moments she really stood out.  What a voice!    We have known of her because of the film The Audition, in which she was one of the National Counsel audition winners. This is her debut at the Met and I can't wait to hear that voice agian.
The costumes of the peasants were the only strange factor of the production - they looked half Russian peasant and half prairie women.   It's set in the 6th century B.C.E. of Jerusalem and Babylon.  Perhaps styles haven't changed that much over the century.
at 10:40 AM