Yes!  Broadway Cares has finally unveiled it's latest in its collection of Broadway Legends Christmas ornaments.  First there was Angela Lansbury as "Mame," then Chita Rivera as "Anita," and last year was Carol Channing as "Dolly."   This year, just as I've been hoping and speculating, it's Bernadette Peters as "Dot" from Sunday in the Park with George!

Sunday in the Park with George is the 1984 musical with music and lyrics by Stephen Sondheim and book by James Lapine.  It opened off-Broadway at Playwrights Horizons starring Bernadette Peters as Dot and Mandy Patinkin as George.   It's the story of the French painter Georges Seurat and his mistress centered around his painting "A Sunday Afternoon on the Island of La Grande Jatte."   The show transfered to Broadway in 1985 and won the Pulitzer Prize for Drama.   It was filmed for television and is available on DVD.   It features one of the most glorious and inspirational songs ever written, Move On, which was performed by Bernadette in the show.  Bernadette thrills audiences by closing her own concerts with this anthem. 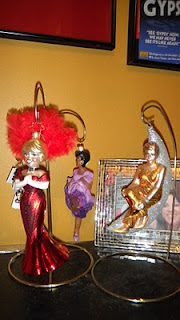 Because I always "need a little Christmas right now," I display these ornaments all year round.

Broadway Cares/Equity Fights Aides (BCEFA) is an amazing organization that funds numerous causes for actors and performers in the arts.   "Shop for the Cause" is just a tiny way of how they raise money for HIV/AIDS assistance and cure research, BroadwayBarks, and programs of the Actors' Fund, including The HIV/AIDS Initiative, The Phyllis Newman Women’s Health Initiative, The Al Hirschfeld Free Health Clinic, The Actors Fund Work Program, The Dancers’ Resource, The Stage Managers’ Project and three supportive housing residences.  BC/EFA also awards annual grants to more than 400 AIDS and family service organizations nationwide.

To purchase, go to www.broadwaycares.org, then to the Online Store, Holiday tabs.  The cost is $55 each and shipping will begin after November 1st.