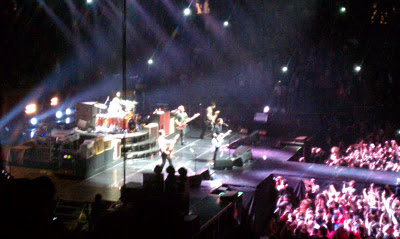 My college roommate Robin dragged me to the Foo Fighters concert at Madison Square Garden on Sunday night.  I have to admit that it was an awesome concert!  When I lived in Texas, I went to rock, blues and country concerts a lot - Robin and I even saw Van Halen in Houston and Austin on the same weekend.  My first concert was Sammy Hagar at Odessa Colliseum when I was 15.  My point is that even thought I spend most of my time these days at operas, classical concerts and Broadway shows,  I'm no neophyte when it comes to rock concerts.

The Joy Formidable, a 3 person band from North Wales, rocked hard as the opening act at 7:30 pm.  I really liked their music and it didn't hurt that their lead singer Ritzy Bryan wore a really cute purple dress with a silver sequined collar.

Social Distortion was the second opening act.  I was a little afraid, but they turned out to be a mix of all kinds of music, including rockabilly, punk, and hard rock.   They closed with a hard cover of Johnny Cash's "Ring of Fire" which was super cool.

At 9:30, the Foo Fighters took the stage.   They played all of their mega hits which are a lot since they've been playing together for 16 years.    The light and video show were impressive, but not over the top.  What was most impressive was the sheer energy that they exerted - lead singer Dave Grohl  was all over that huge stage and spent a lot of time running down a long raised runway thru the middle of floor section and to the back of the arena.   There was a lot of screaming, but a lot of great singing too and some really great playing.

I don't know their music well, but I recognized more than I thought I would.   I especially loved hearing "My Hero", "Monkey Wrench," and "Learn to Fly."

Around midnight, just when I was just about to throw in the towel - I'd had enough of standing in a puddle of beer and inhaling cigarette and pot smoke (shame on Madison Square Garden for not enforcing the law of the New York) - Dave Grohl brought Joan Jett up on stage to jam with them on "Bad Reputation."  It was freaking amazing!   I had 45s of Joan Jett when I was in junior high.     She still sounds exactly the same and the audience went even crazier for her.

The Foo Fighters played for two hours and forty-five minutes!   Now I see why Robin loves them and has seen them so many times in concert.   Despite having grown out of the scene that goes along with a rock concert, the show itself was fantastic and the band members were really funny and entertaining besides being great musicians.