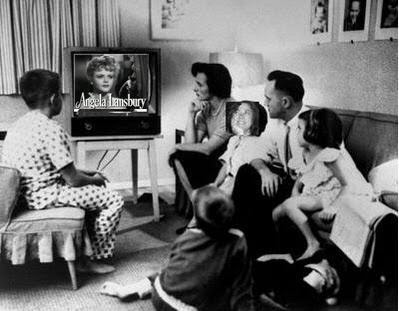 "I'm not one of those people who sits in the dark, looking at their work from 70 years earlier," Angela Lansbury insists. "I'm really not."

Important news in Bobbin's article:  of course I already own all twelve seasons of Murder, She Wrote on dvd,  but it's good to know that re-runs of the series are jumping from Hallmark to TV Land beginning January 1st; hopefully, the commercials will be a little more tolerable and not solely for the incontinent set.   But first, there are dueling marathons on New Year's Day - all day on Hallmark Movie Channel and a mini set on TV Land.

Also, it's a good reminder that Angela is the TCM Star of the Month for January.  Here's the TCM line-up (times are Eastern):

I've seen all of these films except The Greatest Story Ever Told - I just can't get past the creepy Max von Sydow as Jesus. Otherwise, I suggest you watch them all but my Do Not Miss Picks of this screening festival are The Picture of Dorian Gray, Gaslight, If Winter Comes, Tenth Avenue Angel, State of the Union, The World of Henry Orient, The Manchurian Candidate, Death on the Nile, The Court Jester and Sweeney Todd.  Angela is not the star of most of these films, but she always turns out a stellar performance.

It's remarkable to see a teenaged Angela handle the depth of the roles in Dorian Gray and Gaslight.   Angela garnered Oscar nominations for best supporting actress for both of these roles.   She is saucy and trampy in Gaslight, while she is tragic and meek in Dorian Gray.  We get to hear hear Angela sing for the first time in Dorian Gray, although it's before she developed her stage voice so it's very high and sweet.  Notable about Dorian Gray is that Hurd Hatfield, who played Dorian, introduced Angela to Peter Shaw, who would become her husband in 1949 until his death in 2003.

I first watched If Winter Comes to see Deborah Kerr, but the real hero of the film is Walter Pidgeon, whom Angela's character is married to.  Angela was 22 years old while Walter was a fairly old 50, although as dapper as always.  It's a melodrama, but Walter plays a delightful and kind man. Janet Leigh plays the ingenue in her second movie role of Effie, the character that Angela wanted to play and even stood up to Louis B. Mayer to get...instead, he stuck her in another bitchy, way older than her years role, even though they were often bridge partners. You won't want to miss this one on TCM, because it isn't available on dvd.

Tenth Avenue Angel is a sweet film starring child actress Margaret O'Brien while Angela plays her aunt.  It's really a Christmas movie, but is always an uplifting look at life in depression era New York City.  You won't want to miss this one either on TCM, because it isn't available on dvd.

State of the Union should be required viewing for all politicians.  It's the fast moving story of a would be presidential candidate whom is believed to be an outsider, played by Spencer Tracy.   Katharine Hepburn plays his wife, while Angela plays his mistress.  It's notable also because Angela's character is not just the backseat mistress, but a young woman who is pulling the strings behind her lover's candidacy and she runs a powerful newspaper. Spencer was Angela's senior by 25 years, but once again  Angela was once again called on to act way beyond her years. Katharine Hepburn was responsible for getting Angela cast in this movie and Angela more than holds her own against these two cinematic giants.

The World of Henry Orient has become one of my favorite movies of all time.  It's set in New York City in the 60s and the city is practically a leading character as the two teenaged girls race through it's streets in adventures.  Angela plays the bitchy, cheating mother of one of the girls while Tom Bosley (Angela's future co-star in Murder, She Wrote) plays the girl's father.  Peter Sellers is a riot as the object of the girls' affection.

The Court Jester is an adorable, hysterical movie.   In a rare switch, Angela gets to play a beautiful princess and gets to be seduced by a very, very funny Danny Kaye.   Glynis Johns plays the beautiful peasant, also attached to Danny Kaye.  It's a riot of a movie.

Death on the Nile is a must for anybody who loves a good Agatha Christie mystery.  It's also a must because it stars Betty Davis, Maggie Smith, David Niven, Mia Farrow, Peter Ustinov, and Angela Lansbury.  It's an amazing ensemble cast.  Betty Davis delivers one hilarioius quip after another, while Dame Maggie is her downtrodden assistant.  In one of her most comedic turns, Angela plays the boozy, sex-starved authoress of trashy novels, "Salome Otterbourne." Also notable is that Peter Ustinov was married to Angela's half sister Isolde.

Even though The Manchurian Candidate is black and white and is a political thriller about the cold war, it's a timeless film.  It's shocking, terrifying and Angela delivers a terrifying performance as possibly the most evil mother of all time.    She won her second Golden Globe for this performance and garnered her third nomination for the 1963 Oscar.

Finally, most suggested, is Stephen Sondheim's Sweeney Todd: Demon Barber of Fleet Street.   Sondheim wrote "Mrs. Lovett," the meat pie wielding accomplice of Sweeney, for Angela and it's arguably her greatest role and one of the greatest of musical theatre. After winning the Tony for Best Actress in a Musical on Broadway in 1979, Angela took it on the road with George Hearn as Sweeney for an extended national tour.  In 1982, while in Los Angeles, the production was filmed (partially before a live audience) for television.  Both Angela and George were nominated in the same category for the Emmy - he won.  They also both won the CableAce Award.  It's Sondheim's greatest masterpiece, in my opinion, and is full of  both the most humorous and beautiful music ever written for the theatre.

Email ThisBlogThis!Share to TwitterShare to FacebookShare to Pinterest
Labels: Angela Lansbury, Quote of the Day, TCM