The Enchanted Island at Met Opera 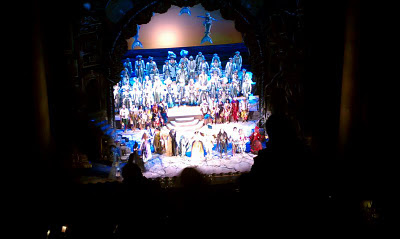 I couldn't wait to see The Enchanted Island at the Met Opera this season!  But then I saw it.   It's supposed to be a pastische of baroque music by Handel, Purcel, Vivaldi, Rameau, Campra, Leclair, Rebel and Ferrandini, set against a mash-up of Shakespeare's The Tempest and A Midsummer Night's Dream.

Ho hum.  It was just sort of boring and I felt like yelling, "Why?!"

I adore The Tempest and admit that I don't know Midsummer that well, but enjoy it, but it seems that Jeremy Sams, the librettist, just took the most boring parts of both of these lovely plays and threw them together, including making up some back story that doesn't even really exist.   As for The Tempest, I think there's a reason why Shakespeare didn't tell us more about Calaban and only mentioned his mother Sycorax.  They aren't likable much less interesting.   Making up a whole scene for opera vet Placido Domingo as Neptune was just silly  - the mention of Neptune is only in a prayer by Propero in The Tempest.

The set, lighting and projections were cool, but most of the costumes and scenes were just silly.   Neptune's scene was eyepopping and funny, but seemed really to have no point.  Kudos for the fun though - the Met Chorus' head resting on cardboard cutouts of naked cherubs, Placido Domingo on his seashell throne and mermaids swimming from the rafters were all hysterical.

Although the music was beautiful, I felt like they left out some really beautiful opportunities - we especially could have heard more from David Daniels as Prospero.  It seems that Prospero just had to take a backseat in this telling.  Joyce DiDonato as Sycorax was somewhat interesting - slowly transforming from the disgusting witch into a beautiful sorceress.  She sang beautifully as the supposedly star of the show, but even she didn't have that much to do.   The real star of the evening to me Danielle de Niese as the spirit of The Tempest, Ariel.   I didn't quite get her costume - Ariel is a spirit but they dressed Danielle here all in brown with fairy wings.  It wasn't evocative of a spirit at all, but she sang most beautifully and was adorable in her antics.

As much as I love baroque, I didn't recognize much of the music.  However, I did love hearing a quartet singing Endless Pleasure, one of my favorite Handel pieces.

I guess I'm glad I saw it even if it wasn't the blockbuster I was hoping for.    I'll just go back to listening to my radio recording of Rodelinda when I want glorious baroque from the Met Opera.

Very nice, thanks for sharing.